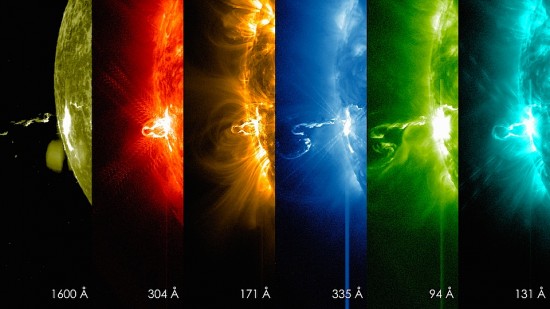 Professor Donald Scott’s The Electronic Sun theory shows that the phenomena observed on the Sun are electrical in nature. Sunspots, solar flares, anomalous coronal heating, and coronal mass ejections (CMEs) on the Sun occur because of changes in the electrical supply that it receives from the galaxy: the Sun is powered externally not internally. Scott’s theory overturns the commonly accepted view that the Sun is a self-regulating fusion reactor. Instead, Birkeland current filaments carry electricity through the Milky Way, supplying the Sun with the energy necessary to sustain its existence.

Celestial bodies coupled with and driven by electric circuits in space are at the heart of what the Electric Universe theory attempts to explain. Charged particles accelerating through powerful electric fields radiate energy in many bandwidths. Changing conditions within Birkeland currents can alter radiation patterns, changing the Sun’s behavior. A massive electromagnetic filament observed in association with the February 2014 solar prominence eruption that created an X-class solar flare, reveals its electrical parentage.

Coronal arches and loop structures connect sunspots together and rise up to penetrate the chromosphere. The chromosphere is, in reality, a Langmuir plasma sheath, named for pioneering plasma physicist Irving Langmuir. The chromosphere is a double layer region of the Sun, where most of its electrical energy is contained. When electric charge flows into the Sun’s plasma sheath, it can increase beyond a critical threshold that triggers a sudden release of that energy, causing solar flares, CMEs, and enormous prominence eruptions.

Powerful looping electric currents generate secondary toroidal magnetic fields that surround the loop. When charge density grows too large, the plasma double layer is destroyed, interrupting the movement of charges, and causing the stored electromagnetic energy to blast into space. Solar flares can therefore be thought of as tremendous lightning bursts, discharging vast quantities of matter at near relativistic speeds.

Electric Universe theory debunks many common misconceptions about the Sun. Although, some heliophysicists are beginning to realize how electromagnetic theories might be useful in predicting how the Sun will act when certain circumstances are considered. For example, a press release from NASA’s Solar Dynamics Observatory announced that looping coronal arches might be used to predict the eruption of a CME, although so-called “magnetic reconnection” rears its mythical head in their descriptions.

More accurate observations of the Sun are needed to identify precursor events. That predictive capability might help prepare Earth-based electric power grids or satellites in orbit for the impact of an increased charged particle density that could overload their systems. In this, Electric Universe advocates applaud the consensus scientific community.

However, images of sunspot filaments, indicate that they are whirling charge vortices. Looking down into a sunspot means seeing the rotating discharge columns in profile. Electric discharges in plasma form rope-like, hollow tendrils. Standard theories do not accept that the darker and cooler regions revealed by sunspots means that the Sun is cooler in its interior. Conventional thinking suggests that the Sun accelerates charged particles into space in the same way that sound waves are amplified. Eruptions in the photosphere are said to travel outward through “acoustical wave-guides”.

Since the Sun appears to be the locus of positive charge with respect to interstellar plasma, sunspots will appear when electric discharges penetrate the photosphere, allowing electric charge to flow into its interior. Electromagnetic flux tubes reveal that it is cooler inside the Sun. The idea of acoustic heat transfer from the core cannot be supported by any observations.

It has been written elsewhere that Jacobsen and Carlqvist first suggested that double layers cause the release of stored electromagnetic energy in the Sun. That idea was further refined by Alfvén and Carlqvist in 1967. Later, Carlqvist postulated that electric fields could accelerate charged particles with up to 10^14 electron volts per unit charge.

Double layers develop on the Sun as electricity flows through its plasma. Positive charges build up in one region and negative charges build up nearby. An electric field appears between the two regions. If that stored electric charge is catastrophically released, it is known as a “Langmuir burst.” Those explosive bursts are what heliophysicists incorrectly refer to as magnetic reconnection.