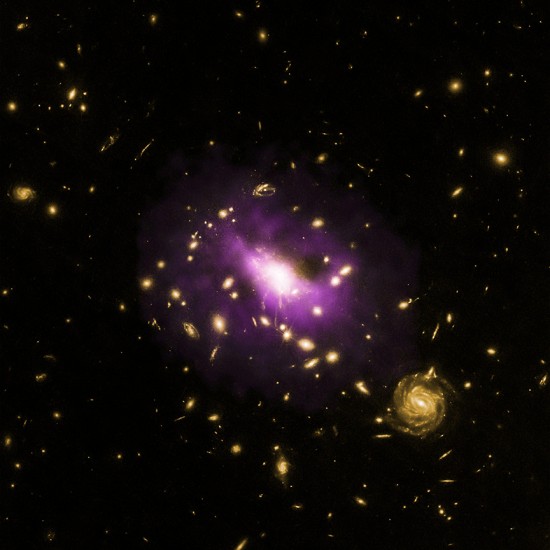 Astronomers have found a lot of misbehaving gas around an elliptical galaxy in a galaxy cluster: It’s too hot to form stars.

The elliptical galaxy must be big because it’s far away—because: high redshift! The gas around it must be comparably voluminous, too. Theorists expect that the large amount of gas should be cooling and collapsing into trillions of stars. But it’s not. This is a problem that kicks sand in theorists’ faces with a number of galaxies.

The gas must be heated, and the only gravity-available source is the galaxy. For that size, the heat energy must come from matter falling into a black hole: Lab-grade matter falling into mundane gravity wells, even with an assist from nuke-fueled stars, doesn’t come close to generating that much energy. However, there is no evidence of infalling material. So the black hole must be running on its batteries: a rapid spin or “ultra” mass.

Moreover, the galaxy’s got jets. And there are “cavities” at their ends: Shock fronts from the jets must be “reverberating” and heating the gas. This causes it to expand instead of to collapse (because: gravity!)—although why the jets don’t also expand, being hot gas in a vacuum, is excused.

A farther-out cavity is off to the side and must mean that the gas has moved or that the black hole is “precessing.” (Let’s not mention that precession requires the black hole to be torqued by another significant gravitational force—maybe from a crypto-black hole.)

Halton Arp, among others, has presented observational evidence that redshift is not an indication of distance. This galaxy cluster may not be so far away after all—and therefore the elliptical galaxy is not so big and the hot gas doesn’t need so much heat. He also has argued that galaxy clusters often show a distribution of redshifts such that the dominant galaxy has the lowest redshift and the others have redshifts that range higher. When redshift is interpreted as distance, this produces the geocentric artifact known as “fingers of god,” in which the cluster members are stretched out in a radial line pointing at Earth.

Arp interpreted redshift as a generational effect: The higher-redshift galaxies may be ejections from the dominant one. The jets mark the contrails of the ejections.

The Electric Universe, of course, has no patience with “hot gas”: Any material with a temperature in the millions of degrees is not a gas. If you can’t say “plasma” and aren’t familiar with its empirical behavior, you should go back to your theoretical cave where your ignorance won’t be embarrassing.

“Cavities” are properly cells of plasma bounded by double layers. Plasma concentrates in those double layers, producing the apparent “shells” of material. The double layers can accelerate plasma, so the high-speed “shock waves” need not be generated by the distant black hole. Plasmoids (“stars”) may or may not form in the Birkeland currents that spiral along them.

“Jets” are also Birkeland currents, in which current carriers (“charged particles”), along with entrained atoms, molecules, and dust, spiral in the magnetic field around the current’s axis. This gives the characteristic “braided” or helix appearance to the jets. The currents are prone to develop instabilities, in which “knots” or plasmoids may evolve.

A self-induced magnetic field encases the current and opposes the expansionary pressure of the hot plasma within it. This generates the long, thin filaments that fail to dissipate as a hot gas would. The electric current continuously supplies the power that the jet radiates. At some point, that power may drop below a threshold value, and a double layer will form around a plasma cell (“cavity”).

Because the entire cluster is driven by electricity, not gravity (no dark matter required!), the jets may change direction and produce, as here, “out of alignment” older cells. Alternatively, because the jets are similar to lightning channels, they may “zigzag”: The “off-to-the-side cavity” may just be a kink in the jet.