Home Picture of the Day Accretion or Expulsion? 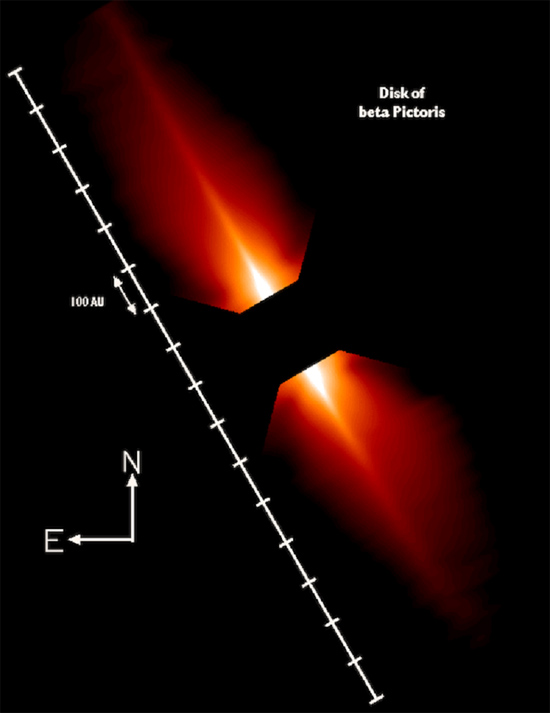 Protoplanetary disks are said to be accreted around infant stars.

A recent press release from the National Radio Astronomy Observatory reports the possibility that collisions between comets and a large planet might be occurring around the star, beta Pictoris. A cloud of carbon monoxide (CO) and dust surrounds the star, so astronomers believe that this “hints” at a gravitational source strong enough to attract stellar debris (comets) and grind it into dusty gas.

According to the Nebular Hypothesis, when a star condenses out of primordial material, the remaining clumps of dust and gas that are not absorbed swirl around, attracting more stray bits, until they also condense, but this time into planets. It is said that our own Solar System was created in a similar “stellar nursery” billions of years ago.

The edge-on ring surrounding Beta Pictoris is orbiting the star at a distance of approximately 14 billion kilometers. It is there that the Atacama Large Millimeter/submillimeter Array (ALMA) telescope in Chile found a high concentration of CO gas. Since their thinking is that ultraviolet light from beta Pictoris would cause the gas to dissociate “within about a century”, it is a foregone conclusion that “something” must be replenishing the gas in the protoplanetary disk (proplyd), otherwise it would have all disappeared. In the gravitational mind of modern astronomy that points to collisions and heat.

Star-forming regions are conventionally associated with high frequency light from their active zones. Extreme ultraviolet shines from the “cosmic eggs”. One of the most iconic images in modern astrophotography is the famous “Pillars of Creation” in the Eagle Nebula, although the vast majority of proplyds are found in the Orion Molecular Cloud and the Carina Nebula.

The Electric Star theory resolves many of the distorted opinions that arise from misunderstanding the role of plasma and electric fields in space. Rather than kinetic activity (heated gas), the radiant emanations from the ring around beta Pictoris are due to electric currents.

Electric discharges in a plasma cloud create double layers, or sheaths, along the current axis. Positive charge builds up on one side and negative charge on the other. An electric field develops between the sides, and if enough current is applied the sheath glows, otherwise it is invisible. Electric currents flow along the sheaths. In plasma, the currents spiral into filaments. The filaments attract each other, but rather than merging they spiral around, gradually pinching down into arc mode discharges.

It is in this way that stars are born. Gravity, although it plays a small role in stellar evolution, is far too weak a force when compared to an electric field and ionized particles. The concentration of CO gas from Beta Pictoris is not the result of cold cometary clumps colliding. It is because carbon and oxygen are common in nebulae (and proplyds). The disks surrounding stars are not due to gravitational accretion, they are due to electromagnetic expulsion.

In an Electric Universe, dust and gas (and planets) ought to be found around other stars. Stars “give birth” electrically from their charged interiors. Since stars are not powered by hydrogen fusion but by incoming electric currents, whatever fusion does take place is most likely taking place close to or on the surface. There is no super-compressed, intensely hot core, radiating energy from thousands of kilometers deep inside. Instead, heavy elements are synthesized in the exterior plasma discharges and then “precipitate” into the star’s interior like a rain of metal atoms.

By that same token, since 90% of the light from nebulae exhibits the wavelength of ionized oxygen, it is not surprising that concentrations of CO can be found around hot, bright stars like beta Pictoris. Electric forces acting on a star might offset its internal positive charge. If that happens, the positive charges will repel each other and accelerate away from the center of the star, resulting in an expulsion disk composed of the star’s ionized interior.