Misconception:
The existence of Dark Matter has been settled.

The universe is made mostly of dark matter and dark energy, and we don’t know what either of them is.
~Saul Perlmutter

Dark Matter is undetectable by any current instruments, is optically inert, does not cause scattering or shadows, has no electrical or magnetic properties, and does not cause friction. Its distribution is arbitrarily assigned wherever it is required by observed deviations from theoretical expectations. Dark Matter is one of those convenient theoretical constructs that enables theorists to explain anomalous observations with precisely fitted exceptions to the theory that has been “anomalized.” Without the construct, theorists would have to admit that the theory had been falsified. 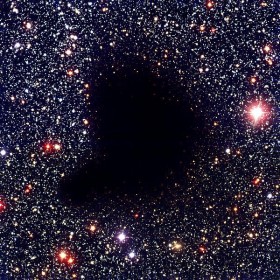 The famous Coal Sack was long thought to be a void in the Milky Way showing empty space beyond, but modern instruments confirmed that it is an obscuring cloud of gas and dust. Credit: Wikimedia Commons.

It is an indication of the inherent weakness of the Standard Model that detectable phenomena comprise less than 5% of the cosmos described by the model. Over 95% of the cosmos exists solely by the insistence of theory and the fervency of proponents’ belief.

The crucial concern in assessing Dark Matter is that of anomalous motion. The velocities of stars in the spiral arms of galaxies appear to remain fairly constant with distance from the center. Unmodified gravitational theory expects the velocities to slow with distance, as with planets orbiting a star. The velocities of galaxies in clusters appear to be too fast for the gravity of the cluster to keep them in orbits. The clusters should fall apart in times much shorter than their purported ages.

But these expectations were based on the assumption that astronomers saw all the matter that caused the motions. That of course is patently false. Astronomers once thought that the dark patches in the Milky Way were voids. They simply assumed that darkness was emptiness. Further investigation discovered that they are clouds of matter that obscure the stars beyond.

Extra-optical telescopes are now discovering titanic quantities of hydrogen in deep space, both in atomic and molecular forms. The discoveries require drastic and ongoing review of the material content of the cosmos. 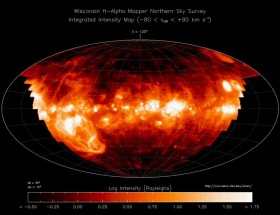 The distribution of interstellar hydrogen in the Northern sky. The Wisconsin H-Alpha Mapper is funded by the (US) National Science Foundation. Credit: Wikipedia Commons.

Nor is it just atoms and molecules. Dust, cosmic rays, stellar winds, and other forms of plasma fill—tenuously—apparently empty space. Plasma, consisting of some fraction of charged particles, not only contributes to the overall mass density of deep space but also has profound electromagnetic effects, which astronomers are not trained to recognize. Its presence and abundance throughout the universe is being revealed as instruments and techniques evolve.

Astrophysicists fabricated a novel substance for the apparent sole purpose of saving the accepted theory.  The true nature of the universe will be known when abundances can be more accurately determined and the relative contributions of gravity and electromagnetism to observed motions can be ascertained — no ghostly “dark matter” required.