Common Misconception 12 — Why Electricity Over Magnetism?

Misconception:
Why electricity over magnetism? The Magnetic Universe does not require an Electric Universe.

Answer:
In the real world, electricity and magnetism occur together as a unitary electromagnetic phenomenon. Scientists and engineers often focus their attention on one aspect or the other in order to solve a particular problem. That doesn’t mean the neglected aspect no longer exists. Even in the case of ferromagnetic materials—bar magnets, for example—the magnetism is due to electrons spinning and orbiting around positive nuclei. The resulting current loops can be oriented to generate the exterior magnetic field. The currents are called amperian currents.

In theoretical treatment, mathematical symbols represent the many aspects of electromagnetic phenomena. This can lull theorists into thinking of each aspect as a thing in itself. They can overlook the larger unitary picture. This has been a longstanding error in astrophysics. The mathematics of a pure magnetic field that is “frozen-in” to a perfectly conducting plasma has enabled theoreticians to dismiss the electrical aspects of plasma in space.

Ironically, the author of the idea, Hannes Alfvén, soon realized his error. He warned scientists against it in his 1970 Nobel Prize acceptance speech:

I thought that the frozen-in concept was very good from a pedagogical point of view, and indeed it became very popular. In reality, however, it was not a good pedagogical concept but a dangerous “pseudo-pedagogical concept”…, which makes you believe that you understand a phenomenon whereas in reality you have drastically misunderstood it.

Alfvén emphasized that theoretical treatments need to be tested constantly against empirical findings to counteract their tendencies to stray into mathematical fantasy. Furthermore, magnetic aspects are much easier to detect and measure than electrical ones, especially in space. Researchers must be constantly on guard against this “out of sight, out of mind” bias. 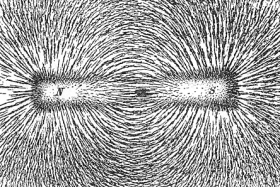 Iron filings scattered on a card above a bar magnet reveal the direction and relative strength of the magnetic field. Note that each filing acts as a small magnet and aligns with the direction of the field but does not constitute a continuous line. Credit: Wikipedia Commons.

Another error that has overwhelmed the study of space plasma concerns magnetic field lines. The direction and strength of a magnetic field can be usefully indicated by an array of lines, just as the changes in elevation of a landscape can be indicated by contour lines. But astrophysicists for some time have talked about the magnetic field indicators as if they were physical objects: the lines are alleged to move and to break and to reconnect. This is errant nonsense, as if landslides were caused by contour lines moving and breaking and reconnecting. This error continues to confuse and to retard the understanding of space plasma.

The EU emphasizes electricity partly to counterbalance the biases and errors described above. In an unbiased world, it would be called the Electromagnetic Universe.

A very few lonely pioneers make their way to high places never before visited . . . they create the living conditions of mankind and the majority are living on their work.
~Kristian Birkeland

A Birkeland current, for example, is emphasized as an electrical current. But its filamentary form is due to the magnetic “pinch” effect that accompanies the electric current. The two go together. Paying exclusive attention to one and ignoring the other will result in seeing only half the universe.