Misconception:
The Big Bang was proved by the Cosmic Microwave Background Radiation.

Answer:
It seemed that Big Bang Theory had been proven beyond doubt by what had been observed in the universe. Diligent work by independent scientists has shown multiple catastrophic flaws inherent in a Big Bang-aligned interpretation of Cosmic Microwave Background Radiation (CMBR.) 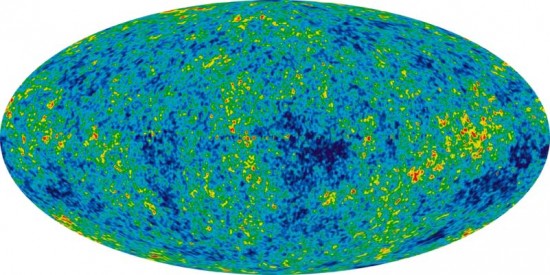 The CMBR as imaged by the WMAP satellite. It is obviously neither hemispherically symmetrical nor the same in every direction (isotropic.) Credit: NASA.

More or less isotropic radiation backgrounds surround the Earth in every waveband known to man. Long wave radio, infrared, ultraviolet, X-ray, and gamma ray backgrounds are easily and confidently associated with astrophysical structure. The assertion made to claim cosmological origins for the microwave background in isolation is apparently that matter in the universe does not radiate at that wavelength. That is patently false. There have been definite correlations found in the CMBR with astrophysical structure, for example the alignment of the Cold Spot and the Great Void.

Assuming that there is primeval radiation coming our way, how would it be recognized? By definition it would have to originate from far behind the galaxies and nebulae that surround the Earth and would at best be mixed up with radiation from those things. The most obvious clue would be that foreground objects would be backlit, casting shadows on the sky. There are no shadows.

The Big Bang prediction is for a completely smooth radiation picture in all directions. It is defined by this “isotropy.” Yet, all current investigation and analysis of the CMBR is concerned with anisotropies in the picture, hence the descriptive name Wilkinson Microwave Anisotropy Probe (WMAP).

Both COBE and WMAP sets of results show a preferred direction towards Virgo at a gross velocity of 600 km per second, famously named the “Axis of Evil” by theoretical physicists Joao Magueijo and Kate Land. Preferred direction is expressly forbidden by Big Bang Theory. In their paper “The Axis of Evil Revisited,” Land and Magueijo state in the abstract, ”We find strong (and sometimes decisive) evidence for the ‘Axis of Evil’ in almost all renditions of the WMAP data.”

The late Professor Geoffrey Burbidge calls a spade a spade. He gets right to it:

From that time on, one huge danger . . .  is that all of the work on the CMB has been carried on by observers who are absolutely convinced that whatever they find, they are quite sure where it came from. This has led to a bandwagon so overwhelming that alternative interpretations of the data are hardly ever mentioned, never taught, or discussed at meetings, or referred to in text books.

In the specific case of the CMBR, mass popular appeal has resulted in abject failure of the empirical scientific method to remain objective.