Answer:
Peer review is a practice that provides both benefits and drawbacks.

The path of specialized knowledge radiates out as the spokes of a wheel, leaving pioneers ever more remote and isolated from others working on similar projects. Ideally, peer review establishes a network, which shares in the discoveries being published and subjects them to independent scrutiny. Qualified investigators in a field—one’s peers—evaluate the methods used in new work. In principle, it is vital that this happen. In practice, its value depends on the integrity and objectivity of the reviewers. 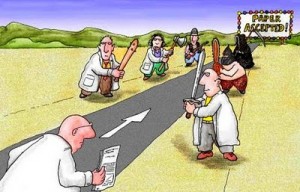 The peer review process is susceptible to conflicts of interest and is easily turned into a form of censorship. It can ensure that published results align with a particular consensus theory. Science is not a democratic process. It is in no sense dependent upon consensus, nor is truth the outcome of a vote. Indeed, consensus is the very antithesis of real science. When a peer review panel begins to promote a particular theory, science is no longer the criterion. Political correctness displaces the physics and the chemistry. One crucial vulnerability in scientists’ practice of the scientific method is the reluctance to acknowledge falsification often because the falsifying facts lie outside their specialized field of view. Peer review can bring attention to data and logical considerations that require attention.

This type of editorial intervention influences more than the standard of science in publications. It also reinforces the appearance of consensus. Scientific merit is not determined by the number of peer reviewed papers a particular model might attract. Schools at all levels too often teach standard models as fact. The schools pay teacher’s salaries to promote standard models. Those models dominate research efforts globally. One result of this is that peer reviewed papers reflect only the views of authors, who pass through this standard-model filter.

Many heavily cited papers, including some describing work which won a Nobel Prize, were originally rejected by peer review.
~David Shatz, Peer Review: A Critical Inquiry (Issues in Academic Ethics)

The Electric Universe is a new paradigm. It is based on new observations and assumptions about the role of electricity in space and in nature as a whole. It is not just a novel theory or specialized explanation of particular objects or events in nature. It does not merely supplement received theories but supplants many core tenets in today’s theoretical science. It is a radical break from most peer-reviewed discourses, where questions about foundational assumptions are deemed to be settled. It paints a picture of the universe on a different canvas with a different palette.

The overriding EU message is that the core assumptions of today’s theoretical sciences have lost their original underpinnings due to the steady stream of space age surprises. New theories based on the straightforward application of alternative, fundamental assumptions are now required. And policies of peer review must not be allowed to simply reinforce entrenched theoretical assumptions.