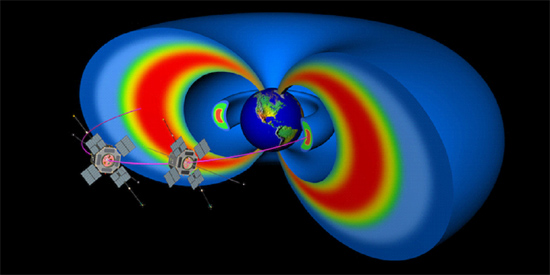 On October 9, 2013 the Juno spacecraft flew by Earth on its way to Jupiter, where its passage through the ionosphere was detected.

NASA launched the Juno Mission to Jupiter on August 5, 2011. After traveling out past the orbit of Mars, the spacecraft returned for a gravity assist from Earth on October 9, 2013, and then headed out to deep space. Arrival at Jupiter should take place in July of 2016.

Although Juno was invisible to the unaided eye, its arrival allowed scientists a unique opportunity. Since it was only 600 kilometers above Earth, NASA was able to track its passage through Earth’s electric fields using the Van Allen probes, launched into orbit on August 30, 2012.

Formerly known as the Radiation Belt Storm Probes (RBSP), the Van Allen satellites were launched in an effort to understand how the Sun and near-Earth space interact. They do this by interpreting the behavior of Earth’s radiation belts, and the way that high speed electrons and ions, otherwise known as plasma, are guided or confined by magnetic fields.

The two spacecraft are in highly eccentric orbits, passing each other and dipping in and out of the belts many times, allowing them to understand and disregard effects of their own presences in orbit, as well as filtering out spatial anomalies. It was the small electrical effects of the Juno probe on the belts that allowed the Van Allen mission to see it passing by.

Plasma is often described as the fourth state of matter. However, since observations confirm that it makes up more than 99% of the Universe, it should be reckoned the first state. It has only been in the last 100 years that scientists have given credence to the possibility that we could be living in a dynamic Solar System where electricity plays an important role. It is evident that the Sun’s electric field extends for billions of kilometers, influencing the planets in their motions, as well as how they interact with each other.

Since plasma is a charged substance, in motion it generates an electric current. An electric current flowing through plasma creates a tube-like magnetic sheath along its axis. If enough current passes through the circuit, the plasma sheath will glow, sometimes creating a number of other sheaths within it. The sheath is called a “double layer”.

Earth is directly connected to the Sun through such double layer sheaths. Vortices of charged particles are accelerated in those sheaths, carrying millions of amperes into Earth’s electromagnetic environment. Those currents enter the polar cusps, where some particles energize the polar aurorae.

According to the Electric Sun theory, an electric field focused on the Sun accelerates charged particles: the faster they move, the stronger the field. However, the interplanetary electric field is extremely weak. No instrument is yet able to measure the voltage differential across 100 meters, but the solar wind acceleration over tens of millions of kilometers does confirm the Sun’s e-field, enough to sustain a drift current across the Solar System. The Van Allen detectors show that, over time, the capabilities of future missions will increase. Taking detailed measurements of interplanetary electric fields might not be so far off, after all.