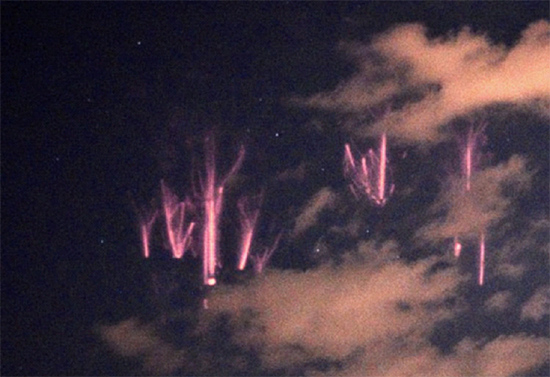 Observations suggest that cosmic rays are not produced by supernova explosions.

Cosmic rays are ionized particles, or fragmented atoms. Electrons are stripped from atoms, leaving them free to move, with positively charged nuclei remaining. The majority of cosmic rays are single protons (hydrogen ions), but uranium and other massive ions have also been detected.

As standard theory states, ions are accelerated to velocities approaching the speed of light by unknown forces, although published research in 2009 identified exploding stars as the best candidate. Most cosmic rays are at energy levels below one billion electron volts, so when they hit atoms in Earth’s atmosphere they initiate small secondary showers of particles and are absorbed before they reach the ground.

In June 2006, the Payload for Antimatter Matter Exploration and Light-nuclei Astrophysics (PAMELA) payload was launched onboard a Resurs-DK1 Russian satellite as part of the Russian-Italian Mission (RIM) research program. PAMELA’s primary goal, in conjunction with the Astrorivelatore Gamma ad Immagini ultra LEggero (AGILE) and Fermi Gamma Ray Space Telescopes (formerly GLAST) is to study the properties of high energy signals from deep space.

According to a March 2011 report, PAMELA has discovered radiant emissions that seem to contradict the conventional explanation for cosmic rays in deep space. New observations by its cosmic ray detector prompted astronomer Piergiorgio Picozza of Italy’s National Institute of Nuclear Physics and the University of Rome to state: “Now we don’t know how cosmic rays are accelerated in space. Before our data, it seems that the paradigm is supernova remnants. Now we have to think of some refinement of this paradigm, or we need to find some other possibility.”

Although exploding stars (supernovae) are misapprehended to be kinetic events involving shock waves and rebound phenomena, interpreting them as the points where cosmic Birkeland currents create “z-pinch” vortices brings everything into focus. Magnetic fields have been detected in space. Those fields are thought to be generated by electric currents flowing through and around galaxies along light-years long “transmission lines” called Birkeland current filaments. Magnetic forces constrict the filaments, twisting them around each other and forming z-pinch compression zones. What are called “double layers” by plasma physicists form in the stellar circuit.

In an Electric Universe, there is another mechanism for cosmic ray acceleration and that is the “exploding” double layer, first described by Irving Langmuir in 1929. A double layer forms in plasma when electric current flows through it.

At times, a double layer might interrupt current flow in the circuit, causing a catastrophic rise in voltage across it. The powerful energy release of the exploding double layer is sometimes observed in power transmission switchyards when a circuit breaker is opened incorrectly.

Electric forces accelerate charged particles with energies of 10^20 electron volts or more. Laboratory experiments with particle accelerators confirm the observation. For mechanical shock waves to achieve that power would mean explosive detonations exceeding the most powerful supernovae ever recorded.