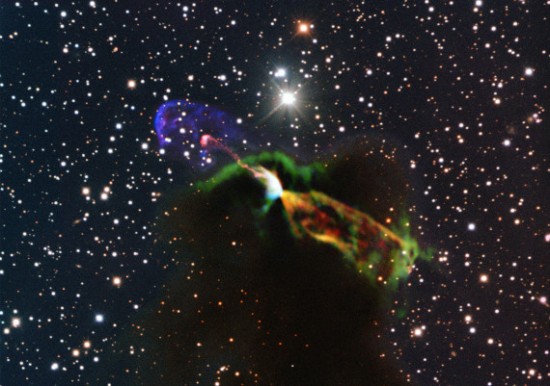 Radio-wave observations of a Herbig-Haro (jetted) star at the edge of an opaque plasma cell reveal the wiring harness that drives it.

In visible light, a spiraling filament jets toward the upper left of the image. It ends in a bright double layer. Surrounding it is a faint tube that also ends in a double layer. This concentric structure is typical of cosmic Birkeland currents.

On the other side of the star from which the jet originates, an opaque cell of dusty plasma blocks visible light. However, radio radiation from carbon monoxide molecules “shines” through the dust. The radio “picture” that emerges is of a structure similar to the visible one. The axial filament shows less detail than in the visible one, but the spiral structure is still evident. The concentric tube of current shows more details that suggest spiraling filaments.

Together, the visible and radio structures constitute the typical hourglass shape of planetary nebulae. In conventional theory, the jets of Herbig-Haro stars are generated as the stars form. In contrast, those of planetary nebulae are generated as the stars die. Mysterious magnetic forces or coincidental orbital circumstances must be invoked to explain the structure: Gravity doesn’t do that.

In the Electric Universe, the hourglass shapes of both Herbig-Haro stars and planetary nebulae are generated by high electrical stress in the Birkeland currents that power the stars. High current densities push the Birkeland currents into glow mode. The currents become visible and also increase their radio radiation. Which parts of the currents glow in what wavelengths depends on such factors as variations in electrical field strength, availability of charge carriers, and compositional sorting.

If the current increases sufficiently, the star may fission into two or more unequal components. This spreads the discharge over a greater area and reduces the current density to a manageable level. That has happened to this star: The radio observations discovered a smaller companion star buried in the dust. The companion also sports a jet, but this one is nearly perpendicular to the other.