Home Picture of the Day A Grander Canyon 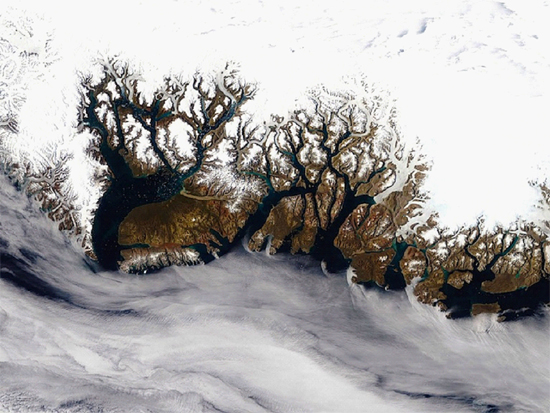 The coast of Greenland with criss-crossing fjords. Credit: NASA

A giant scar beneath Greenland’s ice sheet could indicate an electric discharge.

One of the tenets of Electric Universe theory involves recent catastrophes in the Solar System, including Earth and its near neighbors. Scores of articles outline the possible scenarios that might have devastated our planet in the not-so-distant past.

Recently, scientists from the Bristol Glaciology Centre, University of Bristol; the Department of Geography, University of Calgary; and the Dipartimento di Scienze di Base e Fondamenti, Urbino University announced the discovery of a giant canyon, longer than the Grand Canyon, under the ice in the heart of Greenland. The canyon is measured to be over 800 meters deep and more than 750 kilometers long, extending from the northern cliffs to the center of the island.

Geologists and geographers have been flying over the ice in Greenland (as well as other permanently frozen regions) for more than thirty years, using ice-penetrating radar to map the bedrock beneath the glaciers. Frequencies between 50 and 500 megahertz can “see through” the ice down to the basement. It was these measurements that resulted in the canyon’s discovery.

Jonathan Bamber from the University of Bristol, lead author of a paper published in the journal Science, believes that the Greenland canyon was formed prior to the last ice age, the remnants of which are thought to continue as part of the Greenland and Antarctic ice sheets. Cores drilled into the center of Greenland’s ice down to more than three kilometers are said to indicate dates from 100,000 years ago, so the canyon “must be” older than that.

The primary assumption in the development of dating systems is that the Earth is an isolated planet that does not interact with other celestial bodies. Planetary scientists do say that there have been meteor impacts of staggering size, but nothing like that has taken place for millions of years. Ice cores rely on a uniformitarian hypothesis that requires a slow, steady rate of change. Ice, therefore, is deposited as snow over thousands of years, gradually accumulating into layers. That layering is necessary in order to date the cores.

Problems inherent with ice core dating are rampant. The reader is invited to explore those problems as a personal investigation. Regardless of the difficulties, it is a moot point.

Electric Universe proponents argue that between 5000 and 10,000 years ago (perhaps earlier), the Earth and its sister planets were engulfed in an interplay of celestial forces that have not been seen since. Clouds of electrified plasma and electric arcs described by the ancients as “thunderbolts of the gods” dissected the continental geography, creating what traditional theories say are ages-old structures in an instant of time. As electrically oriented researchers suggest, that catastrophic epoch might have been responsible for the great trenches and rifts that are found everywhere on Earth.

Perhaps the creation of this “grander canyon” took place before the deposition of the ice. Since the icefall, itself, might have been a result of plasma events that sculpted Earth’s geography, the ice would therefore act as a protective blanket, preventing erosion on the rim, as well as preserving the overall structures. It will require more detailed observations in order to be sure, but it is predicted that there will be scalloped edges on the rim, a flat floor and other signs that it was formed quickly by electric arcs, rather than over eons.