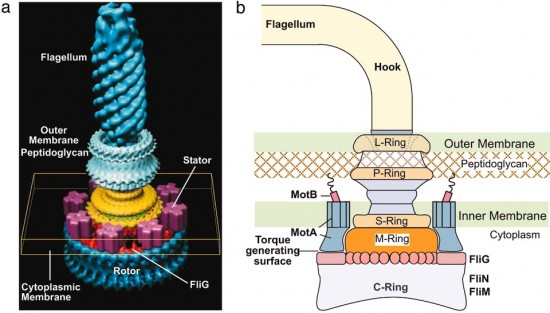 How a rotating flagellum anchors to the cell wall. Credit: David DeRosie

Some bacteria can swim through their tiny worlds. They accomplish this feat with the aid of spinning propellors called “flagella”. The species of bacteria with this capability that is most familiar to readers is probably Escherichia coli, or E-coli.

E-coli possesses a number of flexible, helical filaments, each driven by a rotary motor composed of 40 unique proteins. Remarkably, the individual motors are constructed on the molecular scale, at 45 nanometer diameters. These tiny drive systems are able to move the bacteria over ten body lengths in one second; the human equivalent to running a hundred meters in less than six seconds.

Flagella are about 15 nanometers in diameter and 15 micrometers long. They are made up of a protein called flagellin that gathers into long-chain sub-assemblies, winding into a helical structure with a hollow core. E-coli grows flagella by adding new sub-assemblies that pass through the hollow core and attach to the end. Eventually, there can be as many as 30,000 sub-assemblies making up the left-handed, whip-like structure.

One of the more amazing aspects to flagellar motors is that they do not require ATP for power. ATP, or adenosine triphosphate, is the molecule that energizes most cellular functions. It acts like a battery for living organisms, giving up one of its phosphorus groups in the mitochondria so that the cell can transpire. This results in the formation of an ADP molecule (adenosine diphosphate), that is then “recharged” by the oxidation of glucose through glycolysis. Eating food makes this happen.

However, the motors that spin flagella do not receive energy through this process. Rather, they are driven by an ion flux that captures and releases protons, thereby creating an alternating charge in nearby molecules. Although, since they are so small and so little understood, the way that they operate is somewhat speculative.

According to researchers, there is a charge gradient in the cell wall of E-coli. The molecules that make up the stator, or stationary, portion of the flagellar motor, anchored in the peptidoglycan layer of the bacterium’s cell wall (see illustration) contain two proteins called MotA and MotB. A high concentration of protons exists outside the cell, while a lower concentration exists inside, so the positively charged protons flow into the MotB protein, binding to aspartic acid. This creates a change in the charge balance between the MotA and MotB proteins, causing a vertical repulsion between them, resulting in the first stroke of the motor. The protein is thought to engage a toothed gear-like structure as it moves downward, advancing the rotor step-wise each time the MotB protein receives a positive charge.

Once the first stroke is completed, the aspartic acid releases its protons into the bacterial cytoplasm, causing a conformational change in the charge balance between MotA and MotB. This initiates the second stroke of the motor because the molecules have re-established their “original” charge states. After the second stroke, MotB again receives a charge input that ionizes aspartic acid, endlessly repeating the cycle.

How can proton flow across a membrane drive mechanical rotation? As the book, Biochemistry 5th Edition (Berg J.M., Tymoczko J.L., Stryer L. W H Freeman pub. 2002.) notes: “MotA-MotB may form a structure having two half-channels. One model for the mechanism of coupling rotation to a proton gradient requires protons to be taken up into the outer half-channel and transferred to the MS ring [see above]. The MS ring rotates in a counterclockwise direction, and the protons are released into the inner half-channel. The flagellum is linked to the MS ring and so the flagellum rotates as well.”

In other words, E-coli and its fellows are driven by electric motors.