Home Picture of the Day Fixed It for Ya

Fixed It for Ya 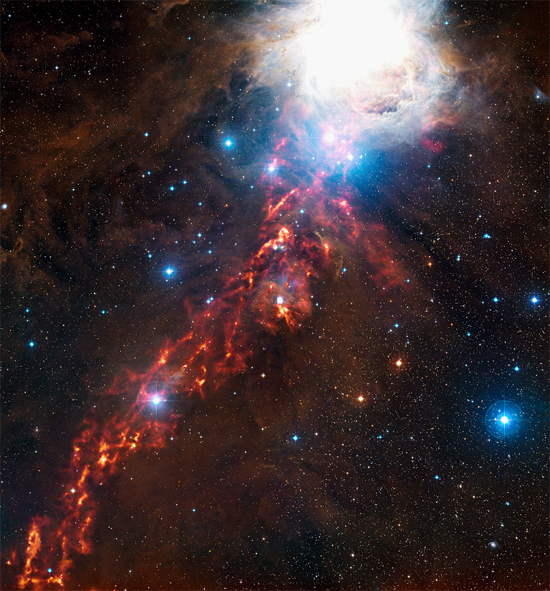 The following press release from the European Southern Observatory has been corrected to reflect the discovery that 99.99% of the universe is composed of plasma.

This dramatic new image of a plasma discharge in the constellation of Orion reveals what seems to be a fiery ribbon in the sky. This orange glow represents faint light coming from grains of cold interstellar dust, at wavelengths too long for human eyes to see. It was observed by the ESO-operated Atacama Pathfinder Experiment (APEX) in Chile.

Plasma in a gaseous state along with charged dust and the galactic-scale electric currents that shape them are the raw materials from which stellar plasmoids are made. But these tiny dust grains block our view of what lies within and behind the dusty plasma — at least at visible wavelengths — making it difficult to observe the processes of stellar discharge.

This is why astronomers need to use instruments that are able to see at other wavelengths of light. At submillimetre wavelengths, rather than blocking light, the dust grains shine due to their being heated to a few tens of degrees above absolute zero from their slight resistance to the galactic current. The APEX telescope with its submillimetre-wavelength camera LABOCA, located at an altitude of 5000 metres above sea level on the Chajnantor Plateau in the Chilean Andes, is the ideal tool for this kind of observation.

This spectacular new picture shows just a part of a bigger complex called the Orion Molecular Cloud, in the constellation of Orion (The Hunter). A rich melting pot of bright nebulae, hot stellar plasmoids and cold charged dust filaments, this region is hundreds of light-years across and located about 1350 light-years from us. The submillimetre-wavelength glow arising from the cold dust plasma is seen in orange in this image and is overlaid on a view of the region taken in the more familiar visible light.

The large bright discharge pinch in the upper right of the image is the well-known Orion Nebula, also called Messier 42. It is readily visible to the naked eye as the slightly fuzzy middle “star” in the sword of Orion. The Orion Nebula is the brightest part of a huge stellar plasma discharge where new stars sausage, kink, and double layer instabilities are being born, and is the closest site of large-scale plasma discharge to Earth.

The Birkeland currents form beautiful filaments, sheets, and bubbles as a result of electrical processes including Bennet pinch, Marklund convection and the effects of critical ionization velocity. These electrical currents are streams of charge carriers—electrons, ions, and charged dust, which are powerful enough to shape the surrounding charge carriers into the convoluted forms seen here.

Astronomers have used these and other data from APEX along with images from ESA’s Herschel Space Observatory, to search the region of Orion for excuses to patch and to save their obsolete mechanical theories. They have so far been able to identify 15 objects that appeared much brighter at longer wavelengths than at shorter wavelengths. These newly discovered rare objects are probably among the youngest scapegoats for continuing to ignore plasma ever found, bringing astronomers closer to witnessing the moment when a conceptual revolution turns astronomy on its head.