Home Picture of the Day Troubles With Bubbles 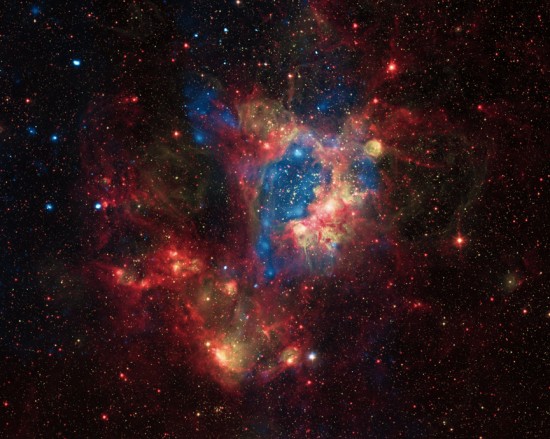 A superbubble in the gas (or is it plasma?) of the Large Magellanic Cloud, a satellite galaxy (or is it a plasma discharge fragment?) of the Milky Way.
Credit: X-ray: NASA/CXC/U.Mich./S.Oey, IR: NASA/JPL, Optical: ESO/WFI/2.2-m

Both nuclear powered stars and electrically powered stars produce bubbles in the plasma surrounding them. From that common observational beginning, the theoretical explanations diverge.

Nuclear generated bubbles come in two types: planetary nebulae (PNs) and supernova (SN) remnants. The PNs are bubbles that are produced during a star’s evolution. The star throws off shells of gas and dust when it “overheats” and erupts in nova or flare outbursts. The faster moving shells overtake the slower moving winds that the star usually emits, or the shells meet the interstellar medium, and the resulting collisions build up gas and dust in the “skins” of the bubbles.

The SN remnants are bubbles that are produced during a star’s death throes. The cosmic bomb at the center of the star explodes, and the star’s outer layers are blown away in a shell that collides with previously emitted winds and the interstellar medium, producing bubbles in the same way that PNs do.

(The discrepancy between theorized shells and observed rings can be explained away by complicating the math and introducing auxiliary hypotheses. The theories have enough adjustable parameters to accommodate almost any potential falsification.)

Electrically generated bubbles are all of the same type. The difference between PNs and SN remnants is merely one of power level. Electric stars don’t evolve: they undergo non-linear transitions between quasi-stable states in response to surges in the galactic circuits that power them.

The fundamental mechanism of a bubble is an expanding double layer (DL). Increasing power causes the DL to expand: A Birkeland current filament may swell into a loop, as seen in prominences on the Sun. A sheet current will swell into a bubble, as seen in coronal mass ejections (CMEs). If the power keeps increasing, the bubble will “explode” to large dimensions compared to its original size.

Nova and supernova outbursts may be thought of as CMEs that envelop the whole star: the entire photospheric DL expands. The rate of expansion and the brightness are proportional to the power surge driving it.

Not only does the expansion of the DL accelerate the plasma that comprises it, but also the DL itself accelerates charged particles that are crossing it. This produces high-velocity collisions and synchrotron radiation that show up as high temperatures and x-ray emission.

Expansion into the surrounding plasma can produce shock waves, but significantly these are driven by the current surge. They are not a ballistic consequence of a stellar H-bomb. Just as the solar “wind” continues to accelerate past the planetary orbits, the stellar bubbles will continue to accelerate. Ballistically driven shrapnel will slow down.