Home Picture of the Day Two for One 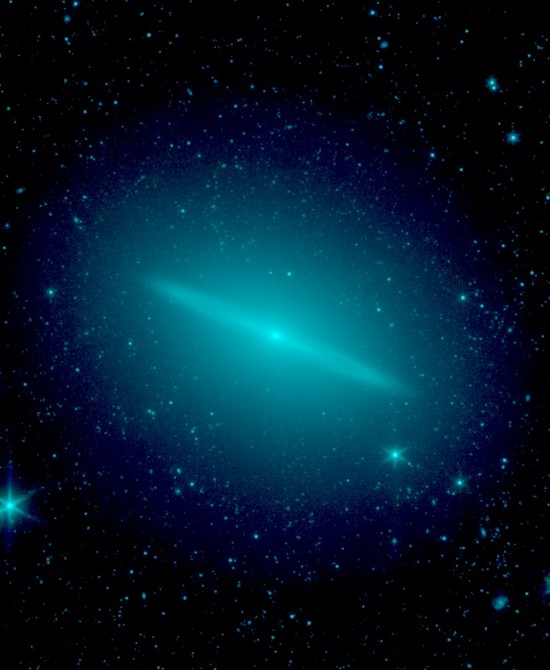 The Sombrero galaxy appears to be a giant elliptical galaxy with an embedded disk.

One of the most significant contributions to plasma cosmology comes from Dr. Anthony L. Peratt, a plasma physicist and protégé of the Nobel laureate Hannes Alfvén. Peratt studied plasma formations in the laboratory for many years, monitoring short-duration z-pinch effects, as well as creating particle-in-cell animations using the best supercomputers available. His conclusions included a theory that galaxies, rather than being condensations of gravitationally bound gas and dust, were actually plasma formations.

Simulations of galactic-scale, field-aligned Birkeland current filaments revealed that “…compression of tenuous cosmic plasma due to the self-consistent magnetic fields from currents conducted through the filaments” resulted in the formation of several galaxy configurations. Among them were elliptical and barred-spiral shapes.

The Sombrero galaxy, also known as NGC 4594 or M104, is a spiral galaxy in the constellation Virgo. Using the redshift measurement system employed by consensus astronomers, it is over 28 million light-years from Earth. That figure could be highly misleading, as several Picture of the Day articles about astronomer Halton Arp’s discoveries point out.

Originally found in 1781 by Pierre Mèchain, the Sombrero galaxy presents puzzling attributes even to this day. It is a spectacular lenticular galaxy when seen through most optical telescopes, with a thick band of dark dust encircling its perimeter. However, as long ago as 1993, long-exposure optical images by David Malin of the Australian Astronomical Observatory revealed a halo of dust and gas completely englobing the galaxy. This led him to speculate that the Sombrero galaxy was a gigantic elliptical structure, with a spiral contained within.

Recently, images from the Spitzer Space Telescope’s infrared instruments seem to indicate that Malin was correct: inside the cloud of obscuring haze are faint stars that can be seen in long infrared wavelengths.

NASA launched the Spitzer Space Telescope into an Earth-trailing orbit on August 25, 2003. Its “cold mission” used a tank of liquid helium to keep onboard infrared detectors chilled to -268 Celsius. At that frigid temperature, wavelengths as long as 180 microns were detectable. In comparison, the longest red light frequency visible to the human eye is approximately .75 microns.

The helium tank was exhausted after five years, so Spitzer is now conducting its “warm mission”. It can still see infrared signals in the 3.6 to 37 micron range because the “cold” of space keeps the instruments at -243 Celsius. The image at the top of the page is colored blue and green to indicate frequencies of 3.5 microns and 4.6 microns, respectively.

According to the Spitzer analysis team, the finding answers a question that has long puzzled astronomers: spiral galaxies are not supposed to have so many globular clusters in orbit around them. Since the Sombrero galaxy has as many as 2000, the fact of its newly discovered elliptical status helps to resolve the issue.

Galaxies exist within a circuit of electricity that flows through the cosmos from beginning to end. No one can tell where the current rises or to what it is attracted, but we see its electromagnetic fields in the magnetism surrounding galaxies and in the synchrotron radiation that they emit. The electric currents organize into fields of plasma composed of neutral atoms, but with a small fraction of electrons, protons and other charged particles also present. Those particles, and the charge-neutral ones they sweep along with them, are driven by the larger electromagnetic field to form “pinches” of matter.

As Peratt’s publications insist, it is that plasma, along with the electricity that it engenders, that drives the structures within the cosmos. Their formation and behavior are indicative of Birkeland current filaments larger than galaxies creating z-pinch zones in which those galaxies can form. Since galaxies are often strung like pearls through space, that arrangement lends credence to the idea.

The Sombrero galaxy most likely demonstrates how other spiral galaxies are constructed. Indeed, it has recently been shown that the Milky Way is surrounded by a vast halo, as well. Perhaps all galaxies are elliptical in nature, with the limitations imposed by our instrumentality preventing us from realizing it.