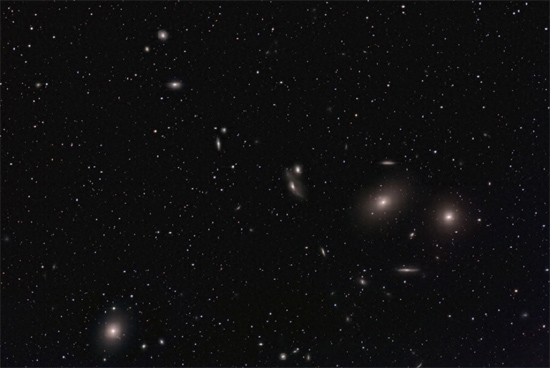 Galaxies often exhibit alignment with one another across vast distances.

According to Electric Universe theory, galactic evolution occurs as large-scale plasma discharges form spinning wheels of coherent filaments that display electrodynamic behavior and not merely that which gravity alone can contribute. Stars in galaxies can also form long arcs that thread through them like silver beads on a string. No nebular contraction theory can adequately explain star formation. Beyond that, the great spirals that collect in clusters, that then also group themselves in superclusters, are beyond any conventional definition.

When plasma moves through a cloud of dust and gas, the cloud becomes ionized, initiating an electric field and the flow of electric current. Electricity moving through any substance forms magnetic fields that tend to align and constrict the current flow. Those fields create what are sometimes called “plasma ropes,” otherwise known as Birkeland currents.

Birkeland currents are electromagnetic filaments that carry electric charges through space. The filaments are double-walled, folded layers of charge separation, isolating regions of opposite charge and preventing them from neutralizing.

Almost every body in the Universe displays some kind of filamentation. Comet tails often occur in pairs. The dusty one forms an arc as it follows along its orbital path. The other one, composed of “stringy” ion filaments, reaches out from the nucleus in a straight line, always pointing away from the region of like polarity. Planetary nebulae are spun from intricate webs of lighted tendrils. Herbig-Haro stars and energetic galaxies emit braided jets. Some galaxies look “hairy,” with threads of material extending from them.

Since the various loads in galactic circuits radiate energy, they must be powered by coupling with larger circuits. How large those circuits are can be inferred by the observation that galaxies also occur in strings.

The standard model of the Universe places galaxies within the void according to redshift (z). Some astronomical observations contradict the conventional view, however. High-z objects are seen to be aligned along the axes of low redshift galaxies, their redshifts decreasing stepwise with distance along the axis. These high-z objects also demonstrate an increase in mass and luminosity with distance. There is some fundamental physics involved here that does not appear in any textbook