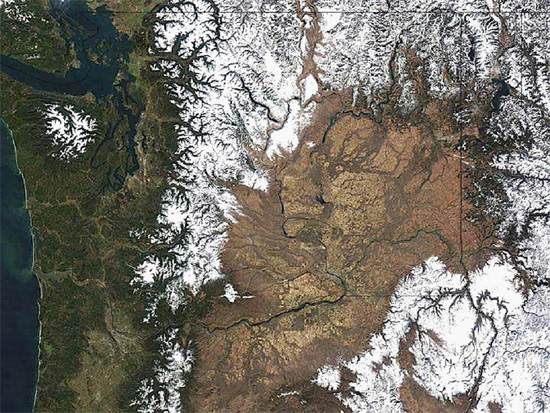 The Columbia River is a life-giving artery to the Pacific Northwest. Is it a recent addition to American geography?

Many Picture of the Day articles discuss cosmic electrical forces that sculpted the face of the Earth in the recent past. The result of that interaction was rivers of plasma that swept across and through the terrestrial lithosphere, cutting canyons, raising continental land masses, leveling mountains, and vaporizing rock and water in the billions of tons. Another unfortunate aspect of those catastrophes was the destruction of innumerable animals, plants, and people. The power in those events can be seen in the Mountains of Patagonia, the Zagros Mountains, or the Scandinavian Peninsula.

According to conventional theories, the Columbia River Gorge started to form in the Miocene Epoch, approximately 15 million years ago. Due to the long time required by water erosion, it continued to develop throughout the Pleistocene Epoch, more than a million years ago. Since it is thought that the Cascade Mountain range was also taking shape at this time, it is used to explain why the Columbia River’s delta moved over 150 kilometers north from its previous location.

As mentioned, it is suggested by geologists that the gradual force of water eating away at the volcanic rock and sedimentary deposits created most of the Columbia Gorge. However, at the end of the last Ice Age, about 19,000 years ago, some speculate that the so-called Missoula Floods cut the steep walls that are present today.

In a previous Picture of the Day, an analysis of the Missoula Flood took issue with the rapid water erosion hypothesis.

In 1925, J Harlen Bretz theorized that the Columbia River Plateau had experienced not one but hundreds of floods. Those floods periodically flowed out of a now dry lake (Lake Missoula) that collected behind a glacial dam. Bretz thought that glaciers blocked an ancient river, causing melting ice to gradually fill the impermanent basin with water. Once the lake reached 300 meters deep, water pressure caused the ice dam to fail all at once, discharging 60 cubic kilometers of water downstream in a cataclysmic flood. The ice dam would then regrow, beginning another cycle of flooding.

Bretz found anomalous terrain throughout Oregon and Washington, evidence that seemed contrary to the gradualism on which his scientific discipline was based. It is fortunate that Bretz was willing to consider alternatives to theories that had been relied upon for more than 200 years. It is unfortunate that his theory, along with the theories of modern geophysicists and geologists, have no precedent when considering electrical activity as a formative agent in structures such as the Columbia River Gorge.

Lightning bolts several orders of magnitude more powerful than anything seen on Earth today could have created the topography found all over the world. One of the principle tenets of Electric Universe theory is that the Solar System has been the scene of catastrophes sufficient to change the faces of entire planets.

Mars, for instance, has been subjected to electric arcs that carved its surface with gigantic craters, deep canyons with multiple coronal discharge side branches at right angles to the main channel, coulees, dry falls, terraces, and other features found on Earth.

Their close resemblance to terrestrial physiography has led planetary scientists to propose that the Martian formations are extremely old; cut by flowing water millions of years ago, rather than consider that they are relatively recent electrical scars. Electricity is never considered when geological theories are presented.

Electric Universe theorists postulate that approximately 10,000 years ago, Earth was engulfed by electric arcs that prehistoric eyewitnesses called “thunderbolts of the gods”. Those gigantic lightning bolts dissected the continental geography, forming what consensus science says are eons-old structures, in an instant.

So, if the uniformitarian hypothesis is incorrect, and Earth’s topography was altered when ancient civilizations were able to remember it, what meaning would the Miocene or the Pleistocene epochs have? Dating the past using conventional methods would have to be abandoned.

Editor’s note: The title of this article is from Woody Guthrie’s lyrics to Roll on Columbia.