Home Picture of the Day The Case of the Missing Delta

The Case of the Missing Delta 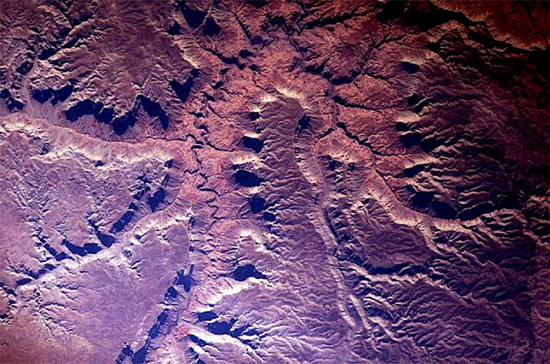 Where is the material that used to fill the Grand Canyon?

In previous Picture of the Day articles, it was suggested that features on other planets and moons should be used to help explain what is found on Earth, rather than vice versa. Since the processes that exist on Earth involve erosion by wind and water, formations on Mars, for example, are often attributed to open water flowing on the surface of that now desiccated body.

The Grand Canyon is approximately 400 kilometers long, 28 kilometers wide, and almost two kilometers deep. Modern geologists assume that it has been forming for millions of years, since the limestone deposits near its bottom are thought to be 250 million years old, based on the type of fossil found embedded in it.

According to the uniformitarian view of paleontology, fossils are the remains of animals and plants that were turned to stone before they decayed and dissolved in mud or silt. Pressure from the overburden of later deposits, possibly volcanic activity, as well, hardened the sediments over millions of years. The various layers of sedimentary rock around the world determine when the organisms lived, since there is an assumption that the upper layers are younger than those beneath. The layers are known as “the geologic column.”

The ideas about the strata and the accompanying fossils suffer from a kind of circular reasoning. If a type of fossil is found in a rock, its position determines the age of the rock because certain fossils are presumed to lie within certain types of rock. However, since fossilized bones cannot be dated, it is the type of stone and its position in the geologic column that determine the age of the fossil. Surely this is an example of hoisting by one’s own bootstraps.

In the Electric Universe hypothesis, there is an answer to the dichotomy, as well as to the problem posed at the beginning of this article: where did the Grand Canyon’s rock strata go? Even today, the question of the Grand Canyon’s origin confounds geologists. What caused the Colorado River to make several right-angle turns in its journey to the sea? If water erosion alone is considered, then it was also necessary for the river to flow uphill at one point, while punching through a stoney mountain range.

Along with the river’s desert wandering, another conundrum facing geophysicists and hydrologists is the lack of a delta. Why is there no accumulation of sediments in the Sea of Cortez? If the Colorado River has been eroding the Grand Canyon for such a long time, what happened to the mud and sand that is supposed to have washed downstream?

One of the tenets of the Electric Universe theory is that the planets and moons in the Solar System were scarred by massive plasma discharges at some time in the recent past. As mentioned above, Mars exhibits enormous formations that all share common characteristics. Regardless of scale, canyons, cliffs, and trenches on Mars possess scalloped edges, vertical walls, flat floors, transverse ripples, a narrow channel inside a wider one, crater chains, and Lichtenberg figures etched into the surrounding strata.

All images of the Grand Canyon from space reveal similar morphology. There are scalloped edges along its rim; so-called “hanging canyons” are perpendicular to the main channel; the side branches are Lichtenberg figures; the riverbed is narrow, while the main canyon is much wider; and the walls of the canyon are predominantly vertical.

Birkeland currents caused by the interaction of charged bodies might act like plasma torches, excavating the bedrock, and then drawing it up the secondary discharge vortex. Just as a welding arc accelerates matter against gravity, rock and dust will be hurled into space. Thus, the Grand Canyon’s material is not found in a delta because it is no longer on Earth.

This also means that it could be far younger than its estimated millions of years, since radiometric dating systems would have been completely randomized by the electromagnetic effects of interplanetary lightning bolts. Therefore, fossils and stratigraphic placement need to be seen from a catastrophic viewpoint and may be useless when it comes to measuring their absolute age.