Home Picture of the Day Snow White and the Frozen Dwarfs

Snow White and the Frozen Dwarfs 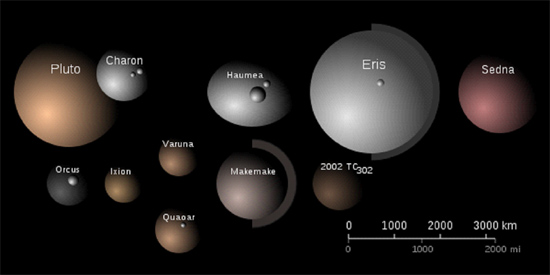 On August 24, 2006 the International Astronomical Union adopted fixed definitions for various objects in the Solar System.

“Snow White,” otherwise known as 2007 OR10, is a dwarf planet about 13 billion kilometers from the Sun. Its orbit, canted by almost 31 degrees to the plane of the ecliptic, is so large that it was closest to the Sun in 1856 and will not reach its farthest point until 2130, taking more than 550 years to revolve.

Snow White joins many other icy worlds so far from the Sun that it would be hard to pick out that luminary from the star field. It is in a similar orbit with its sister dwarf Eris (2003 UB313) within a region occupied by so-called “Trans-Neptunian Objects” (TNO) or “Kuiper Belt Objects (KBO).”

Astronomers Kenneth Edgeworth and Gerard Kuiper proposed a Kuiper Belt theory in 1951. In 1992, the as yet unnamed 1992 QB1 was discovered, confirming the idea that a group of frigid objects beyond Neptune was in orbit around the Sun.

Dwarf planets are also part of the TNO designation, although they are in a subclass by themselves. In 2006, a controversial vote was cast at a meeting of astronomers in Prague that provided a way to classify various celestial bodies. Four relevant resolutions were proposed:

Resolution 5A: “Definition of Planet”

Resolution 5B: “Definition of Classical Planet”

Resolution 6A: “Definition of Pluto-class objects”

Resolution 6B: “Definition of Plutonian Objects”

According to the vote, a “planet” is a celestial body that orbits the Sun, has a nearly round shape, and has “cleared” its orbit of extraneous debris. Another classification was added to the terms used by astronomers: “dwarf planet.” A dwarf planet is essentially something that looks like a planet but is not a planet. Pluto is now considered a dwarf planet, as is the asteroid Ceres. Along with the aforementioned Eris and Snow White, Haumea, Makemake, Sedna, Quaoar, and Orcus are also likely to be dwarf planets. Pluto’s moon Charon would also fit if it were not a moon. There are dozens more that await further investigation.

Immanuel Kant’s theory that the Solar System was born from a dusty cloud of gas, or nebula, floating in space is known as the “Nebular Hypothesis.” As Kant suggested, the cloud contracted because gravity drew the cloud particles together into clumps. As they grew, the clumps became more attractive, finally accumulating into a mass. The gravitational force became so strong that it compressed the mass into a hot ball, rotating with the cloud’s original angular momentum. It gathered more and more matter until a nuclear fusion reaction ignited it, giving birth to the Sun and a structure called an “accretion disk” circling its equatorial plane.

The accretion disk is said to have extended beyond the orbit of Neptune. According to scientists, eddies of matter formed in the spinning ring of dust and gas. Those eddies grew larger, slowly sucking in more and more particles until hundreds of millions of impacts from nebular condensates gradually formed the planets. The Kuiper Belt, as well as the theoretical “Oort Cloud,” are supposed to be “holding areas” for the remaining material that did not condense into planets (or dwarf planets).

In a previous Picture of the Day, another class of Solar System object called “centaurs” was discussed. It was noted that they are what could be called “cometary asteroids” and come in several colors: reddish-brown, blue, green, and brownish-yellow. As suggested by this writer, the centaur objects could be colored because they were ejected by the gas giant planets; their colors corresponding to the colors of their parents.

An interesting characteristic of the various dwarf planets is that they, too, are colorful. Snow White, contrary to its name, is reddish in color like its sister Haumea. Pluto itself is brownish-yellow, while Eris is green.

In a plasma cosmogony hypothesis, the stars are formed when cosmic Birkeland currents twist around one another, creating z-pinch regions that compress the plasma into a solid. Laboratory experiments have shown that such compression zones are the most likely candidates for star formation and not collapsing nebulae. When stars are born, they are probably under extreme electrical stress. In that case, they will split into two or more daughter stars, thereby equalizing their electrical potential.

“The fission process is repeated in further electrical disturbances by flaring red dwarfs and gas giant planets ejecting rocky and icy planets, moons, comets, asteroids and meteorites. Planetary systems may also be acquired over time by electrical capture of independent interstellar bodies such as dim brown dwarf stars. That seems the best explanation for our ‘fruit salad’ of a solar system.” Wal Thornhill

When New Horizons arrives at Pluto in July 2015, Electric Universe theorists expect the Nebular Hypothesis to be falsified again, as it has in the past. 99% of the Universe is plasma, so the conclusions derived from the Hypothesis are not connected with real observations.