Home Picture of the Day A Kinked Link 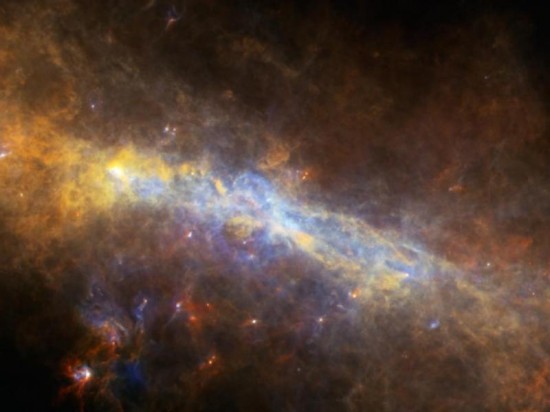 The warped ring in the center of the Milky Way glows in various infrared wavelengths. Credit: ESA/NASA/JPL-Caltech

According to a recent press release, “…observations from the Herschel Space Observatory show a bizarre, twisted ring of dense gas at the center of our Milky Way galaxy.” The ring observation is not new, as reported in a previous Picture of the Day. What is new is the bizarre figure-eight structure.

What Herschel saw was not visible to optical telescopes, since the intervening dust and gas obscures the view of our galaxy’s nucleus. Several past infrared views had revealed a portion of the ring, sparking speculations that it exists because inertia from galactic spin, as well as that imparted by gas moving across the central bulge, creates a standing wave.

The latest images show the complete ring, with the figure-eight or “infinity” structure. The warped nucleus of galaxy Centaurus A was discussed in a previous Picture of the Day. It was noted that many active galaxies display transverse, donut-shaped plasma discharges, as well as plasma jets erupting from their axes. Twisted rings inside galaxies form because helical electric currents squeeze plasma inside them, creating cosmic “transmission lines” through space known as Birkeland currents. These currents confine clouds of ionized gas within electromagnetic fields, causing star formation and toroidal currents around the galactic axis on its equator.

In a recent Picture of the Day, it was reported that the reason galactic rings flatten and curl at the edges is because of plasma instabilities in the torus. As electric current density increases: “The edges curl in and out and upwards and downwards to the current flow.” [Anthony L. Peratt, “Characteristics for the Occurrence of a High-Current, Z-Pinch Aurora as Recorded in Antiquity,” IEEE Transactions on Plasma Science, Volume 31, Number 6, December 2003, pages 1195-6.]

Double layers form when positive charges build up in one region of a plasma cloud and negative charges build up nearby. A powerful electric field appears between the two regions, which accelerates charged particles. The electric charges spiral in the magnetic fields, emitting X-rays, extreme ultraviolet, and sometimes gamma rays.

Toroidal filaments couple to hourglass-shaped current sheets that are subject to diocotron instabilities: the current flow through plasma sometimes forms vortices that change into distorted curlicue shapes. This phenomenon has been witnessed in many laboratory experiments, as well as in the polar aurorae.