Home Picture of the Day The Glasshouse Mountains 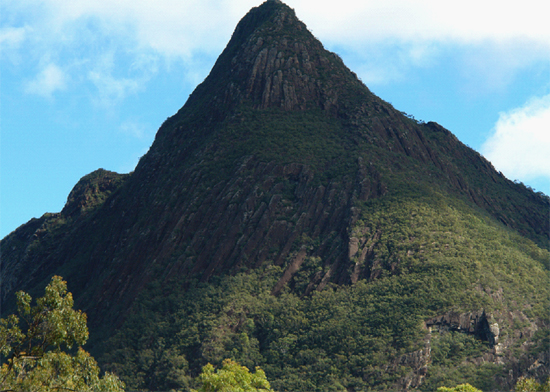 In the consensus view, all valleys are caused by water erosion and solitary peaks must be volcanoes.

The various peaks in the Glasshouse Mountains are supposed to be remnants of volcanoes that erupted eons ago, although there is no evidence of basalt, lava flows, or calderas that would normally be expected. In fact, the main peak of Mount Beerwah comes to a point. Its surface is a type of sandstone that is comparatively soft. The lower section is smooth, as though it was once melted, while higher up, the surface becomes column-like structures that are twisted.

On the northern face of Mount Beerwah there is a section missing, exposing the interior. It is there that surprising features are revealed. The interior is composed of a very soft gypsum-like white rock. When weathered, it forms a talc-like substance at the base of the cliff. Imbedded in the soft rock is a honeycomb structure composed of ironstone, which is harder than the sandstone on the surface of the peak.

This structure is an anomaly that does not fit into the volcano theory, and it is difficult to explain. However, if electric current in the form of plasma arcs is considered as an alternative to weathering by wind and rain, the composition of the peak makes more sense.

If, as the experts suppose, Mount Beerwah is the remnant of a volcano that has been weathered over a few million years, the soft white rock would have accumulated at the base of the cliffs. Estimating the amount of weathering by the amount of “talc” residue indicated a few thousand years at most, not millions of years.

Another interesting aspect of this area that the line of mountain peaks sit near an existing coastline. Their geographical location brings up the question of whether plasma discharges have also excavated the ocean basins. In several previous Pictures of the Day, the formation of coastal topography has been associated with such discharges.

Nearly all formations of Earth reveal the effects of plasma machining. In order to see, the internal model must exist. Earth’s geology, viewed from an electrical perspective, unveils a uniquely distorted landscape that might have formed in a short time.