There is another cause of filamentation of currents in plasma. This is due to the fact that there is a force of attraction between any two parallel currents. By “parallel currents” we mean that the direction of flow or motion of like charges (say, the electrons, or the protons or ions) in one filament of matter in space is in the same or nearly the same direction in both of the two (or more, in some cases) filaments of current. Each current generates a magnetic field which circles the first current and attracts the second current according to the normal laws of electro-magnetism. herefore the two currents are drawn together, as illustrated in this tutorial (courtesy of the National High Magnetic Field Laboratory website), and this short video of two current-carrying conductors and the forces induced between them, showing parallel currents and non-parallel currents, and the resultant forces (courtesy YouTube and MIT Physics Lecture Demonstration Group).”

If two parallel filaments occur in the same vicinity, or form out of a sheet of current due to the filamentation processes, then they will attract each other and initially move toward one another under under the magnetic attraction described by the Biot-Savart Law. Therefore there is a tendency for current cylinders to occur in pairs. 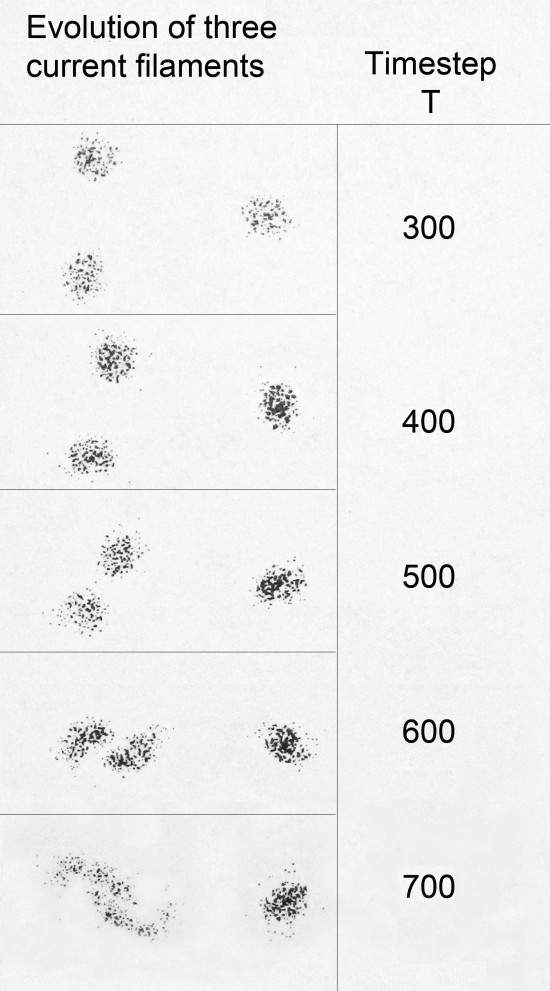 The inverse-distance dependency of the Biot-Savart force law between current-conducting filaments leads – curiously – to pairing of filaments. This shows 3 current filaments in a particle-in-cell (PIC) computer simulation, where only two will interact strongly while the third remains quiescent. This leads directly to “twoness” or “doubleness” when many filaments are present in a plasma with a significant magnetic field. Credit: adapted from Fig. 3.21, Physics of the Plasma Universe, Peratt, Springer Verlag,1992

A point of balance is reached when the long-range attraction force is balanced by a shorter-range repulsion between the two counter-parallel spiraling currents’ azimuthal components. Analysis shows that there is an offset in the centers of the attractive forces that results in a couple, or force of rotation, acting on each current. The twin currents will therefore tend to spiral around a common axis in a helical motion. As before, the axis of the helix will tend to be aligned with the general magnetic field.

This arrangement of current pairs is known as a Birkeland Current after the Norwegian physicist Kristian Birkeland, who first studied them in the early part of the 20th Century.

The spiraling effect of currents around each other gives the appearance of twisted ropes. Because the currents are aligned with the magnetic field, Birkeland Currents are often called ‘magnetic ropes’ or ‘flux tubes’. Although not inaccurate, this description tends to disguise the current-carrying nature of the filaments and imply that the effect is due to magnetic forces alone. As we have seen, this is not correct, as magnetic fields coexist with electric currents. 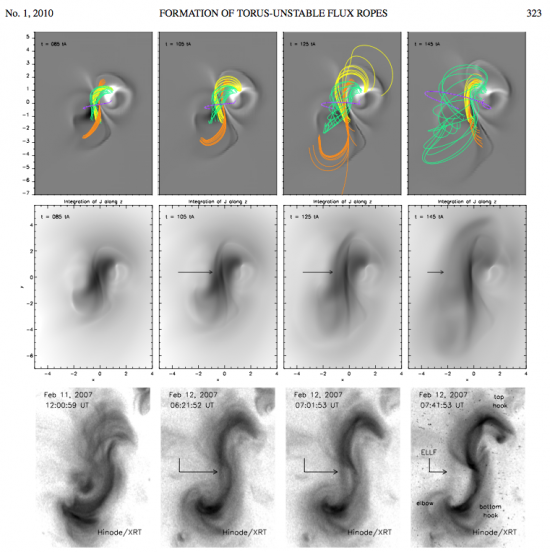 Birkeland currents can also attract matter from the surrounding region. This is because the azimuthal magnetic fields created by each axial current form a pressure gradient radially inwards with a minimum between the two currents, while the magnetic fields extend beyond the current rope itself. This causes charged matter and ionized species external to the current rope to be attracted toward the centre of the current rope, the process known as Marklund Convection (see 6.12).

Although the effect is similar to the I × B force of a single current cylinder, the magnetic pressure minimum between the twin currents can be a more efficient mechanism for concentration of matter.

The plasma density outside the Birkeland Current is reduced while the density inside the rope is increased. Birkeland Currents are therefore often associated with density variations in the plasma.

7.3  Visible Effects of Currents in Space 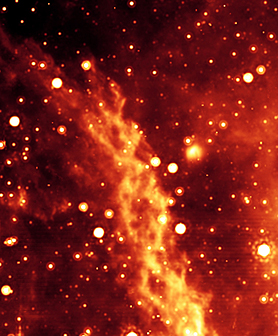 Twisted current filaments in the Double Helix Nebula near the center of the Milky Way, in infrared light. Image credit: NASA/JPL – CalTech/UCLA

Filamentary structures of the type just described are common in space: examples include Auroral filaments, flux ropes from Venus, Solar prominences and coronal streamers, cometary tails and interstellar nebulae where webs of filaments are often seen. Filamentary neutral hydrogen structures have already been mentioned (see Marklund Convection in 6.12 above). Filamentary structure has also been observed in the arrangement of clusters of galaxies.

We have already seen that Double Layers can form in glow discharge tubes in the laboratory. Obviously these DLs permit the transmission of current through them, as well as having the property of accelerating ions and electrons in the strong electric field within the DL. To distinguish them from CFDLs they are known as Current-Carrying Double Layers (CCDL).

A CCDL forms in a different way from a CFDL. It is usually triggered by some form of instability or change in the current flow.

As an example of a change which causes a CCDL to form, consider what happens when a current passes into a region where the plasma density is lower. As the current is mainly carried by the lighter electrons we can consider the situation relative to the ions in the first instance.

The way this is achieved is by formation of a CCDL at the boundary of the lower density region which accelerates the electrons into the region. The strength of the DL will increase until it is just sufficient to provide the electron velocity necessary to reduce their density to match the lower ion density and maintain charge neutrality.

Of course the ions are also affected by the DL but the overall effect is similar to that just described. Also, the faster electrons can cause additional ionization which modifies the requirement for additional velocity but a DL will still be necessary to provide the necessary acceleration.

CCDLs can also be formed as a result of flow instabilities in the counter-streaming electrons and ions comprising the current.

The actual mechanism of the Buneman instability is complicated. However, in essence, the density of ions and electrons in a plasma will always vary locally from absolute neutrality. The plasma then self-adjusts to correct any imbalance. These density variations occur at a frequency dependent on the plasma temperature and the current passing through it. If the current density is high enough then the frequency of the density variations is too fast for the plasma to adjust itself. The situation has become unstable.

This type of instability has been found to lead to the formation of a CCDL. The variations in ion and electron densities cause local electric fields to develop. These fields exchange energy with the ions, which begin to oscillate with large amplitude and so amplify the density variations. Areas of differing charge density set up electric fields between them.

As the electric field increases due to these density variations, the electron flow in the current is disrupted and some electrons become ‘trapped’, or start to flow backwards in local vortices. The result is formation of a CCDL with populations of accelerated electrons and ions, and trapped electrons and ions downstream of the DL.

This process is similar in some respects to fluid flow instabilities. The CCDL is in some ways like a hydraulic jump, where the fluid velocities are different on either side of the jump; the jump contains vortices of trapped fluid; and the jump itself is ‘fixed’ in position.

However this is not to say that fluid analyses are complex enough to model the electro-dynamical motions of charged particles in the fields they themselves create. A principle difference is that the DL accelerates particles, in opposite directions depending on their charge, while a hydraulic jump reduces the fluid flow velocity by introducing turbulence.

A CCDL will always concentrate a part of the current-producing potential drop within the DL region and so reduce the potential gradient in the remainder of the flow.

As CCDLs occur when changes in the flow characteristics occur, pinches in the current, where the area of the flow is constricted, may also cause DLs to form at the point where the flow area changes.

Electrons accelerated across the potential drop of a CCDL will tend to lose their energy in collisions with neutral atoms beyond the DL. These excited atoms will in turn lose energy by radiation as they return to the ground state. Formation of a DL therefore acts as a means whereby the plasma can dissipate excess energy in a manner analogous to a resistor in an electrical circuit.

This mechanism contributes to the stability of plasma circuits by ‘safely’ dissipating the energy which might otherwise result in more turbulent instabilities developing.

As already discussed, there is a principal difference between current-carrying double layers (CCDL) and current-free double layers (CFDL), which are formed by different mechanisms and distinguished by whether or not the DL allows a significant electric current to pass across it.

Another classification is based on the strength of the DL. Depending on the potential drop across it, a DL may be classified as weak, strong or relativistic. Each class will have different effects on charged particles in the surrounding plasma.

A weak DL will decelerate particles with the plasma potential that approach from the ‘wrong’ side, but then re-accelerate them as they pass through the DL.

If the potential drop across the DL is sufficient to cause particles to acquire energy larger than the rest mass energy of the electron then it is known as a relativistic DL. A relativistic DL will therefore accelerate electrons to near the speed of light as they pass through the potential drop. This can occur in the powerful current-carrying, collimated  plasma jets found along one or both polar axes of active radio galaxies. 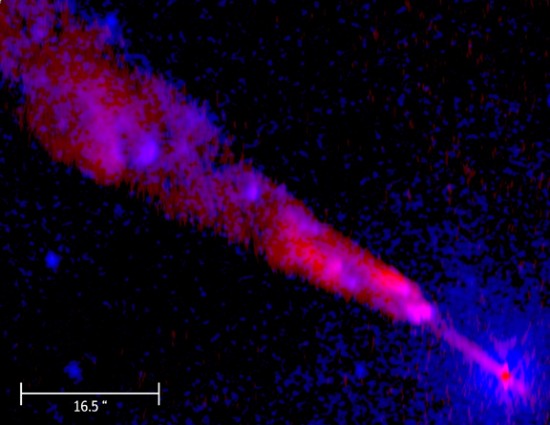