Home Picture of the Day Far Distance Run Around 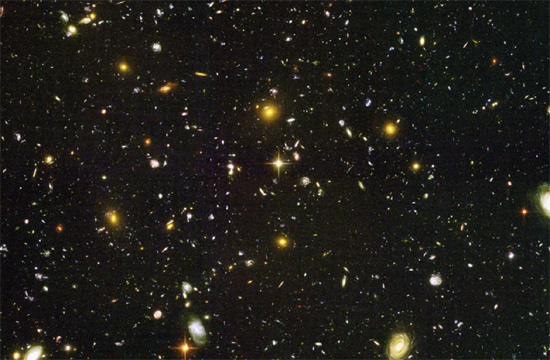 Redshift theory inhibits new research into the age and size of the Universe.

Two major points in Big Bang theory are that redshift is proportional to distance and that it also indicates velocity. It is assumed that the larger an object’s redshift is the farther away it is and the faster it is moving away from the observer. Those two ideas led to the commonly held belief that the Universe is expanding.

Astronomer Edwin Hubble, based on his own observations, as well as those of Vesto Slipher, believed that he had observed remote galaxies receding from the Milky Way in 1929. His greatest surprise was not the recession itself, but the apparent high velocities associated with it. It seemed as if some galaxies were moving away at thousands of kilometers per second.

Spectrograms from Hubble’s galactic images appeared to indicate a “redshift” of light frequencies. He adapted the Doppler effect (after the Austrian physicist Christian Doppler) to the spectra of various galaxies. His thought was that the change in location of “Fraunhofer lines” (for the German physicist Joseph von Fraunhofer) demonstrated a shift toward the red end of the spectrum because of galactic recessional velocity.

Fraunhofer lines occur at certain regions in the spectrum because different elements absorb unique light frequencies. If they are in a different location, then they are assumed to be Doppler-shifted from the element’s velocity. Hubble’s conclusion created the foundation for galaxy-scale distance calculations and their supposed recessional velocities. Some galaxies are said to be receding at over 90 percent of light-speed.

Although many observations contradict the consensus view, and have been doing so for 40 years or more, those data are ignored or marginalized. High redshift quasars have been located in axial alignment with galaxies at substantially lower redshift. Sometimes they are connected to those lower redshift galaxies by “bridges” of glowing gas and dust.

According to a recent press release, the Hubble Space Telescope has recorded the image of a galaxy over 13 billion light-years distant, making it the farthest object from Earth ever seen. As Rychard Bouwens, co-author of the report in the science journal Nature article said: “These observations provide us with our best insights yet into the earlier primeval objects that have yet to be found.”

In other Picture of the Day articles, the current theories of large-scale structure that are based on cosmological distance assumptions have been brought to question. Astronomer Halton Arp, for instance, interprets galactic redshift to be an indicator of age and not distance.

Electric Universe theory proposes that galaxy clusters are Birkeland current z-pinches in superclusters that make up a “superfamily” hierarchy. Birkeland currents occur in a “nest” of double helices: each filament of electric current is a tube consisting of filament pairs that spiral around a common axis. Therefore, galaxy clusters are composed of individual galaxies, while stars make up the galaxies.

Electric currents charge and discharge vast concentrations of plasma at every scale from star to supercluster, causing some z-pinches to overload. In that case, another plasma blob gets ejected from the overcharged galactic parent, forming a quasar and distributing the current load over a larger area. Arp wrote:

“The typical case is that the largest galaxy in a cluster is a radio E, and the other bright galaxies in this cluster are aligned on either side of this central galaxy along the line of elongation of the radio components. It is argued that this general physical phenomenon can only be explained by having the line of galaxies, or their progenitors, ejected from the central galaxy along with the radio emitting material.”

Halton Arp’s work prompts the question: how big and how old is the Universe if redshift readings are not reliable indicators of distance?