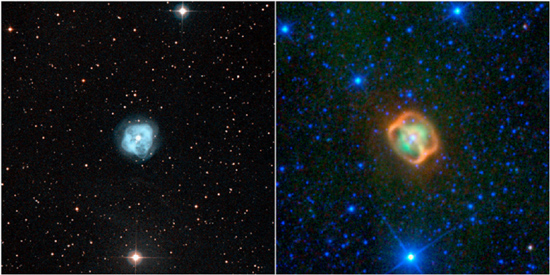 Most nebulae exhibit the unmistakable characteristics of electrical activity.

Previous Thunderbolts Picture of the Day articles have argued for an electrical interpretation of astrophysical observations, so that there is an alternative available for those who want extracurricular exploration and deeper levels.

Every science journal describes nebulae like NGC 1514 in terms of gases and “blowing” dust, along with “winds” created by “shock waves” from exploding stars. In many cases a nebula is described as “star forming,” because intense points of X-ray radiation, or extreme ultraviolet, indicate to astronomers that new thermonuclear fusion reactions have begun within the cloud.

A recent press release uses similar terminology when it refers to “jets of material” from a white dwarf star “smashing into” the wall of a gas bubble ejected from a companion star. It is said that the areas where the jets impact the wall create the false-color orange rings seen above. The material is thought to be heated by those collisions, causing it to glow in infrared.

The Electric Universe theory presupposes plasma and magnetic fields forming electric stars through enormous, diffuse Birkeland currents that power the galaxy, preventing plasma from dispersing inside their light-years long helical coils. When the electric current density inside the filaments gets high enough, the plasma that carries the current begins to glow and to “pinch” into plasmoids that might eventually become stars.

When electrical stress is low and the plasma contains a small concentration of dust, only the stars in a nebula “light up” in arc-mode discharge. Where electrical stress is greater, as in NGC 1514, curling filaments, jets, and any surrounding “gas” clouds can also light up. Of course, dust clouds can reflect the light from nearby stars, but NGC 1514 illustrates the characteristic filaments and cell-like behavior seen in plasma laboratory experiments.

The light in the nebula is produced by electrical discharge, so ultraviolet and X-rays can be generated by the intensity of its stellar arcs. Any nebula could be thought of as a laboratory “gas-discharge tube,” similar to a neon light, which emits light because the gas is electrically excited.

When plasma moves through a dust or gas, the cloud becomes ionized and electric currents flow. The currents generate magnetic fields that confine themselves into coherent filaments known as Birkeland currents. The charged particles that compose the currents spiral along the magnetic fields, appearing as electrical vortices. The forces between these spinning Birkeland currents pull them close together and wind them around each other into “plasma ropes.”

Invisible electric sheaths can get “pumped” with energy from galactic Birkeland currents in which they are immersed. Excess input power might also push them into “glow mode.” Nebulae are ignited with electric triggers.