Home Picture of the Day Lines We Neatly Stumble Over

Lines We Neatly Stumble Over 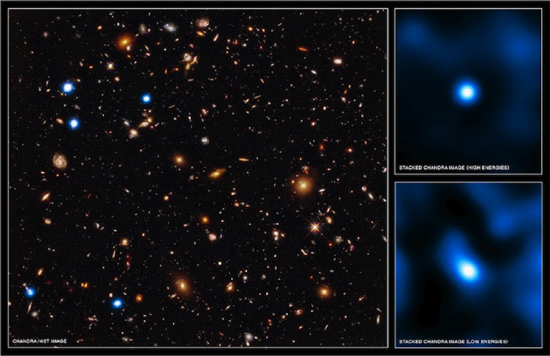 A recent press release proclaims that “astronomers have obtained the first direct evidence that black holes are common in the early Universe.” The tortuous path of prevarication between the evidence and the hole is direct evidence of irony.

The evidence provided is a few blue smudges. To be direct, the interpretation of these smudges as black holes in the early universe must rest on an unquestionable rock of secure knowledge. Unfortunately, the easiest way to establish such a rock is to ignore the questions. The knowledge so obtained will be secure as long as skeptical qualms don’t attenuate the fervency of belief.

Our choicest plans
have fallen through,
our airiest castles
tumbled over,
because of lines
we neatly drew
and later neatly
stumbled over.

from Grooks, by Piet Hein

A skeptical examination reveals that the conclusion dangles from a contraption of assumption cantilevered from prior assumption and extended precariously over a bonfire of contradicting evidence.

The “early universe” claim assumes that redshift is solely a Doppler effect of receding velocity. This has been our experience in the Solar system, so why shouldn’t the assumption hold true throughout the universe, despite all the fabulous and surprising phenomena we’ve discovered. (In contradiction, much evidence exists for pairs of objects with similar high redshifts located on opposite sides of low-redshift active galaxies along their spin axes.)

In conformity with the “easiest” way to make a rock of knowledge secure, as mentioned above, the possibility that these smaller and fainter objects are actually smaller and fainter is ignored. (In contradiction, direct evidence—i.e., actual measurements—shows that the smaller and fainter members of galaxy clusters consistently have greater redshift than the largest and brightest members.)

If redshift is a measure of velocity, which is then a measure of distance, these small faint objects must actually be huge and luminous. In fact, they must be radiating more energy than the assumed-to-be-securely-known processes of gravitation and fusion will allow. The only way to get this energy density is with a supernatural concentration of mass.

This is where astronomers retreat into a tower of theory sealed against any contamination by empirical questions and ignore the known electromagnetic limits on compressing matter. They let radius decrease without limit, divide by zero, and conclude that density is infinite: voilà! a black hole, from which nothing can escape. Having turned one impossible cartwheel, they turn another: matter that’s being pulled into the hole has its mass (whatever that is) converted into energy, which does escape—as the ultraluminous radiation that we observe. So the black hole that pulls everything in blows everything out.

By this time there are so many adjustable parameters, assumptions, and imaginary objects that any amount of energy could be produced. The black hole is a blank check written for whatever is needed to balance theory with observation. To call this twisted and self-serving path “direct” is to excuse every paperhanger who ever bilked his credulous victims. It’s doubly sad because these blank-check writers are bilking themselves and their science.

The Electric Universe interprets the blue smudges as electric discharges in galaxies whose distances are indeterminate. Without measurements of current and voltage, writing numbers for any of these quantities would also be writing blank checks. However, the electrical processes can be demonstrated and studied at reduced scale in a laboratory, and they can account for the evidence that must be ignored in the “unquestionable rock” model. The Electric Universe is not secure knowledge to be believed but speculative knowledge to be experimented with.