A Superstar for Gravity is Normal for Plasma 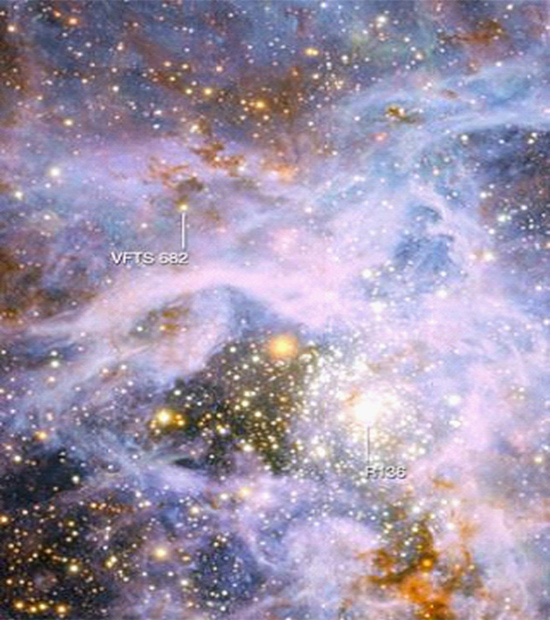 This view shows part of the very active star-forming region around the Tarantula Nebula in the Large Magellanic Cloud, a small neighbor of the Milky Way. At the upper left is the brilliant but isolated star VFTS 682 and at the lower right is the very rich star cluster R 136. Credit: ESO/M.-R. Cioni/VISTA Magellanic Cloud survey. Acknowledgment: Cambridge Astronomical Survey Unit

A bright star without companions challenges popular theories. Electricity comes to the rescue.

The European Southern Observatory (ESO) has released this image of a “superstar,” named VFTS682. It appears reddish, but the color is attributed to the absorption of higher wavelengths by surrounding dust. The spectrum indicates a surface temperature of 50,000 C: It must be white-hot. To be this bright in red, the star must be a giant with 150 times the mass of the Sun. If standard stellar evolution theory is correct, it will soon explode as a supernova.

It appears to be isolated, not a member of a cluster. The Tarantula Nebula contains ten clusters of new stars, and the closest one to this star has several similar stars. However, it’s unlikely that the cluster would have gravitationally ejected such a massive star. It’s also unlikely that such a massive star would have formed by itself. Astronomers are puzzled over how to adjust theories and observations to fit this rogue star into their consensus model.

The electric model of stars has an immediate advantage over the consensus one. It was developed from actual observations of the behavior of the medium from which stars are made—plasma. The consensus model is based on deductions from theories of gas behavior with a little magnetism gratuitously thrown in. As one might expect, the electric model readily accounts for the complex behaviors of stars made of plasma without the many surprises and adjustments that afflict the gas model.

Electric stars are at the focus of electromagnetic (Bennett) pinches that form in galactic Birkeland currents. Those galactic currents are shaped into helical filaments by cylindrical pinching forces acting along the currents’ axes and causing them to spin. Hence, electric stars tend to form in strings, either singly or in clusters, and their axes would tend to be aligned with the galactic currents’ axes. The pinch forces pull in plasma from surrounding regions and concentrate it along the filaments and in the stars. When the current density exceeds the glow-discharge threshold, the filaments and stars begin to shine.

The stars are more like balloons than rocks. Their “surfaces” are the equilibrium positions of plasma sheaths required to maintain stability of the discharge. Mass has little to do with it. Mass determinations from luminosity powered by a hypothetical central nuclear furnace, as with mass determinations from orbital motions, tell us nothing about a star’s composition. The beauty of an electric star is truly only skin deep.

Electric supernovas are explosions of double layers that envelop the entire star, comparable to a scaled-up version of a so-called coronal mass ejection. The consensus speculation that supernovas result from the implosion of a thermonuclear core that runs out of fuel is based on faith in a sequence of theoretical deductions and assumptions that can never be tested. Exploding double layers in the rectifiers of the Swedish power grid were what launched Hannes Alfven’s career, the father of plasma cosmology. They can be—and have been—studied in a laboratory.