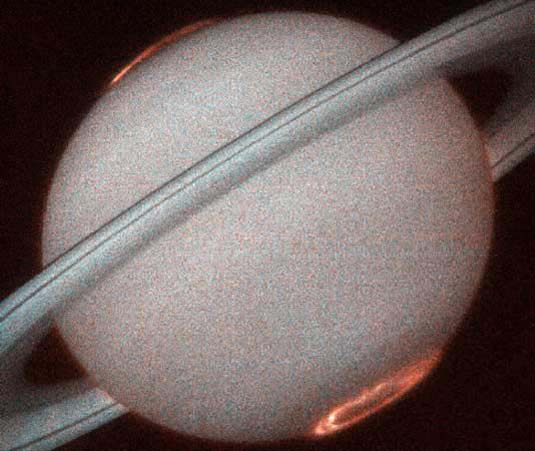 An electron has only 1/1840th the mass (approximately) of a proton, so electrons will have much higher velocities than ions at the same temperature. This is because kinetic energy is proportional to the mass of the particle and the square of its velocity, K.E. = 1/2 mv².  Therefore, at the same temperature, the ratio of velocities will be inversely proportional to the square root of the particle masses.

For example, average electron velocity will be around 43 (i.e., √1840) times higher than the velocity of a single proton. If the positive ions in the plasma are heavier than a single proton then the difference will increase accordingly.

What is more, because of the Principle of Conservation of Momentum, an electron will tend to undergo a larger change in its velocity than an ion does in a collision between the two particles.

The electrons’ higher velocity results in more rapid interactions, which means that the electrons reach thermodynamic equilibrium (“the same temperature”) amongst themselves much faster than the ions do. Any increase in velocity, whether from collisions or external energy inputs, is therefore ‘shared out’ amongst the electrons very rapidly.

In a plasma the temperature is often expressed as a thermal potential which is equal to the potential drop (change in voltage) through which the particles would have to fall in order to gain the same amount of energy. The kinetic energy can then be expressed in electron-volts or eV.

The hotter the plasma, the faster the electrons and ions are moving in random thermal motion and the higher their potential. A potential of 1 eV is equivalent to a temperature of 11,604.5 K. Particles with potentials many orders of magnitude higher are common in space.

Note: one must be cautious about the conversion between electron volts and thermal temperatures in plasma.  Plasmas can become ordered so that charged particles follow paths that are aligned with the local direction of the accompanying magnetic field.  Such current flows are termed field-aligned currents.  Under this condition, charged particles are moving approximately parallel to one another, and, partly due to the low density of particles, collisions of the thermal variety can become very rare.

The high temperature alleged for the solar corona is based on spectroscopic observations of the light (electromagnetic radiation including frequencies outside visible light) which indicate how much ionization of atoms has occurred.  The ionization energy in eV is inferred from the wavelengths of light emitted, and converted by the formula above to equivalent temperature.  The thermal aspect of temperature which is caused by large numbers of random collisions is not necessarily present, however, even if there has been sufficient energy input to strip electrons away from their nuclei.  The electrons can be fast (energetic) while their (thermal) collision rates are low.

The high velocity of the electrons is especially important in understanding many aspects of plasma behavior, including radio galaxies, galactic and stellar jets, and production of synchrotron radiation and cosmic rays.

If plasma is contained within a laboratory tube or other vessel, the electrons and ions in the plasma will impact the walls of the vessel with a frequency proportional to their velocity. On impact, particles are absorbed by the walls.

As the electrons have much higher velocities than the ions, the rate of electron impact will be many times that of the ion impacts. As a result, the walls of the vessel will acquire a negative charge.

In the steady state, only the fastest electrons will still be able to get through the adverse potential gradient from the negative surface. Most electrons will be prevented from approaching the surface. This results in a layer of plasma adjacent to the surface in which the ions outnumber the electrons. This positive layer is known as a Debye Sheath.

Similar effects are found if the surface is charged negatively or positively by connecting a source of potential such as a battery. The charge on the surface repels like charges in the plasma, leaving behind an oppositely-charged sheath.

This is analogous to rolling a ball up a hill. If the ball has enough kinetic energy then it will reach the top. If not, it will get a part of the way up before coming to a stop and then rolling down again. The sheath potential is analogous to the height of the hill.

5.4  Charged Bodies in a Plasma

Similar sheaths will form around any charged body in a plasma where the body has a different potential from the plasma itself. The plasma effectively isolates the foreign body by forming a sheath round it. The sheath will tend to screen out the electrostatic field from the alien charge in the same way that a sheath tends to isolate a negatively charged surface. The body eventually may be neutralized by opposite charges that it absorbs.

If the charged body can artificially be given a positive or negative charge by connecting it to an external source such as a battery, ions or electrons, depending on the charge, will be attracted to the body and so a current will flow. By careful measurement of the current for a range of voltages, it is possible to measure the potential of the plasma itself. One such device is named a Langmuir Probe after Irving Langmuir, 1881–1957.

Current flow from the solar wind can be observed at planets with magnetic fields which have polar “cusps” or “holes” that guide charged particles down to and through the body, creating auroral displays in the upper atmosphere. 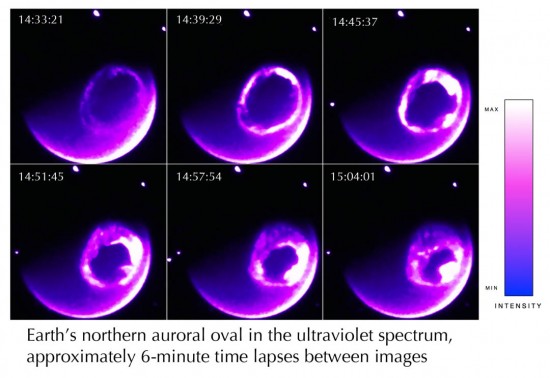 At smaller scales, some planetary moons move in plasma-filled orbits, with charged particle flows directed from the moons’ polar regions along magnetic field lines to and from “hotspots” in the auroral ovals of the larger planet.  Examples include Ganymede, Europa and Io at Jupiter, Enceladus at Saturn, and possibly Uranus and Neptune as well. 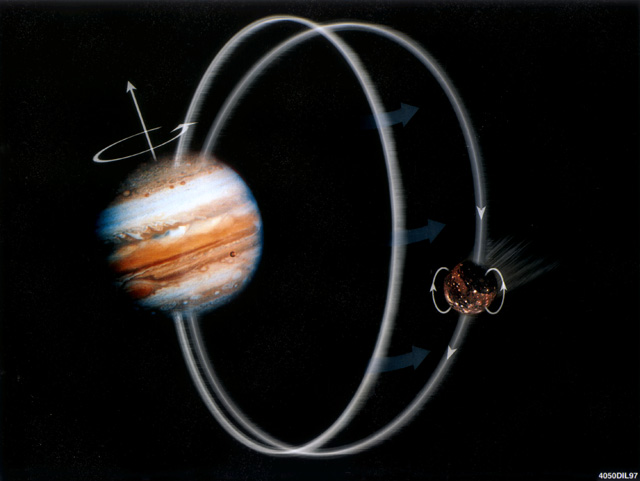 Io-Jupiter field aligned polar current or “flux tubes”, creating not volcanoes, but enormous, long-lasting electrical discharges which machine away Io’s surface and deposit it as ions and compounds in its plasma torus. Credit: Nasa/Cassini Imaging Team 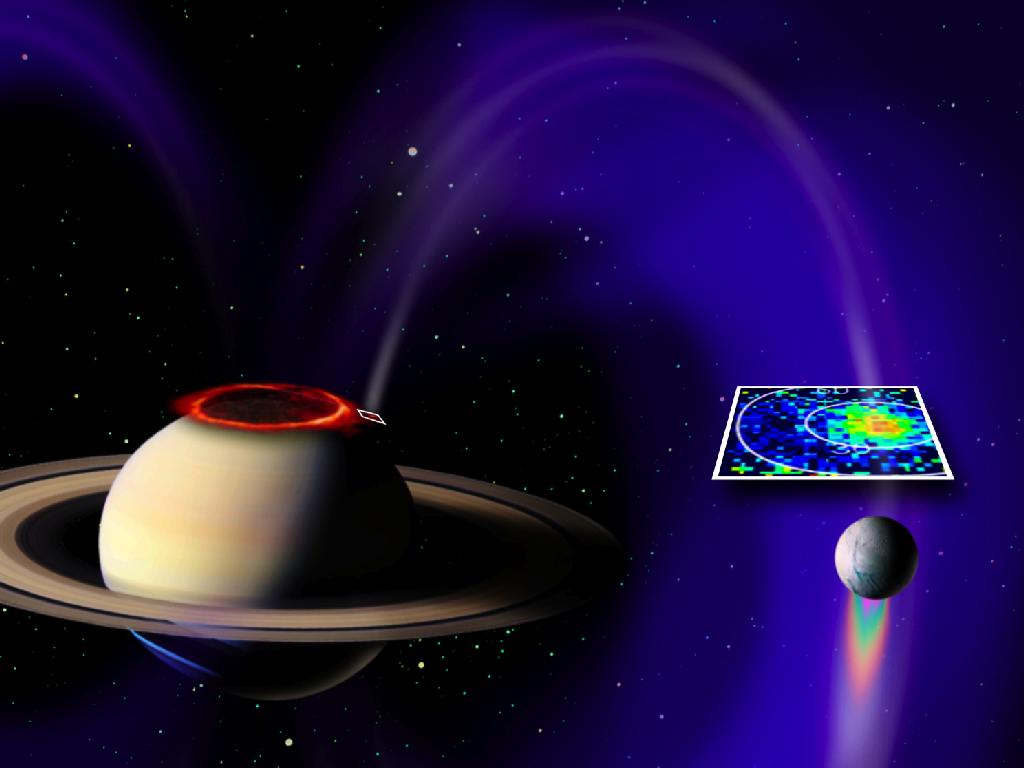 Saturn and its polar electrical connections to Enceladus. Measured cross section of current tube, above; Enceladus south pole jets where current is machining away the icy surface and depositing it into Enceladus ionosphere and plasma torus, similar to Io, above. NASA/Cassini Imaging team

Similar effects also occur between two adjacent regions of plasma with different characteristics. For example, the two regions may have different temperatures, densities, or degrees of ionization. In this situation, the different velocity distributions in the two regions will set up a double sheath at the boundary whereby each region effectively insulates itself from the other.

The double sheath will consist of adjacent thin layers of positive and negative charge, separated by a relatively small distance. It is one type of Double Layer. Because no externally driven currents are involved, sheaths between different plasma regions are known as Current-Free Double Layers (CFDL). More on double layers in plasma here. Note especially the external links, linked reference papers and publications at the bottom of this article. Double layers and sheaths are well-known phenomena in plasma dynamics, described in textbooks and best described in Wiki’s discussion of the Vlasov-Poisson equation:

“In general the plasma distributions near a double layer are necessarily strongly non-Maxwellian¹, and therefore inaccessible to fluid models. In order to analyze double layers in full generality, the plasma must be described using the particle distribution function, which describes the number of particles of species α having approximately the velocity v near the place x and time t”

¹[From Wikipedia, Physical Applications of Maxwell-Boltzman Distributions: The Maxwell–Boltzmann distribution applies to ideal gases close to thermodynamic equilibrium with negligible quantum effects and at non-relativistic speeds. It forms the basis of the kinetic theory of gases, which explains many fundamental gas properties, including pressure and diffusion.] (Emphasis by Editor)

Importance of the reference above: This is the reason that conventional hydrodynamic and magnetohydrodynamic equations of fluid flow are inadequate to a full and reasonably accurate mathematical description of plasma dynamics. Consequently the computational method called particle-in-cell (PIC) simulation was developed for plasma modeling in massively parallel computer systems in the 1980s. Here is a Wikipedia article on PIC, and here is a more technical paper on the subject.

We have seen that CFDLs form between regions of plasma with different characteristics. As an example, let us consider the effect of a temperature difference (in electron volts, ref. 5.1 above). 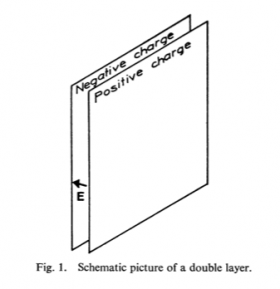 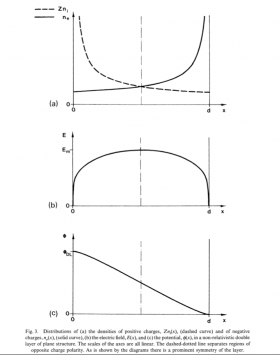 The thin regions near the boundary containing an excess of ions or electrons constitute a Double Layer at the boundary which has an electric field and associated potential drop across it.

The formation of sheaths at boundaries between different plasma regions creates cells of plasma. This cellularization is a defining characteristic of plasma behavior. Gases do not behave in this fashion, which is one reason why it is not possible to apply gas laws to plasmas.

Note that the formation of Double Layers cannot be effectively modeled by fluid analyses such as magneto-hydrodynamics (MHD) because it is caused by and is dependent on motions of different individual particles, not on the bulk motion of the plasma.

Double layers are one of the most important aspects of the self-organizing characteristics of cosmic plasma, as we will see. 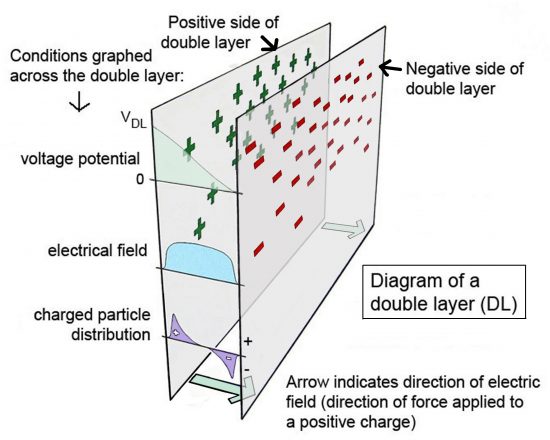 A general introduction to Plasma Physics from Wikipedia’s perspective can be found here , including properties, phenomena and mathematical models. While Wikipedia often has well-written articles, like anything else it can sometimes be unreliable or incomplete, or prone to biased editing, so always use care when evaluating articles from Wiki, as well as other sources