Home Picture of the Day The Truth of False Knowledge

The Truth of False Knowledge 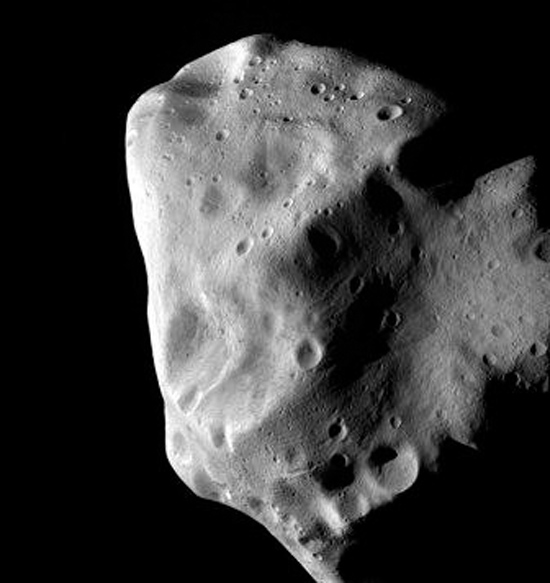 The key to modern knowledge is the exclusion of disproof and other possibilities.

From the press release (emphasis added):

Data from [five instruments] were combined to create the most complete spectrum of an asteroid ever assembled.

This spectrum of Lutetia was then compared with that of meteorites found on Earth that have been extensively studied in the laboratory. Only one type of meteorite — enstatite chondrites— was found to have properties that matched Lutetia over the full range of colours.

Enstatite chondrites are known to be material that dates from the early Solar System. They are thought to have formed close to the young Sun and to have been a major building block in the formation of the rocky planets…. Lutetia seems to have originated not in the main belt of asteroids, where it is now, but much closer to the Sun.

The astronomers are off and running: there are papers to be written and cited, grants to be applied for, more observation programs to be proposed, students to be taught, and … yes, press releases to be issued proclaiming the indefeasibly known. The balloon of knowledge expands; no one stops to notice that it’s full of hot air (not to be confused with plasma).

Only ignorance (or denial) of alternative theories enables the fraud of the “known” to be passed off at the start of the race. Enstatite chondrites date “from the early Solar System” if the nebular hypothesis is true—which it isn’t—and if such ideas as the Exploded Planet Hypothesis, recent planetary catastrophism, and the existence of plasma aren’t.

The nebular hypothesis was proposed in the late 1700s, discarded because it didn’t work, and then resurrected for lack of anything better. Diffuse clouds of gas and dust, especially if they have any net angular momentum, won’t collapse much: the increasing centrifugal force soon counteracts gravity. If the cloud is admitted to be plasma, standard theory assumes (but wrongly) that magnetic fields are “frozen” into it—and that prevents collapse. As the cloud collapses, it heats up—which tends to make it evaporate.

But perhaps a miracle occurs and the cloud somehow collapses all the way down to Solar System dimensions. The young Sun will spin off a disk of material from which different elements and compounds will condense at different distances. This is the material from which the planets will accrete—if all the problems with getting a cloud to collapse can be overcome with another miracle in the disk.

Since objects moving in the same or nearby orbits don’t collide (as demonstrated by the Earth-Moon system and many moons of the Jupiter and Saturn systems), another miracle is required to push them together. Perhaps something sticky coats the particles and makes them agglutinate when the impossible collisions occur.

By making appropriate assumptions about conditions in the disk, one can prove that the inner planets formed from similar material. (Of course, with that methodology, one can prove anything one wishes.) But even that exercise in circular confirmation comes back around to bite: A footnote to the press release admits that “although they all formed from similar material, it remains a mystery why the inner three planets are so different.”

Among other possibilities is that Lutetia is right where it was left by the explosion of or ejection from a larger body. The Solar System may not have collapsed from a cloud long ago in a theory far away from evidence; it may have assembled itself over time from processes that have a history…and may still have a future. Ejections, plasma pinches, electromagnetic captures, rearrangements of orbits, even Herbig-Haro-like axial alignments may be intermittent phenomena that modern humans have overlooked because of the short time of their experience—or because they deny the testimonies of their ancient ancestors.

Enstatite chrondites are “known” to be primordial material only if one’s knowledge is restricted to the ambit of conceit.