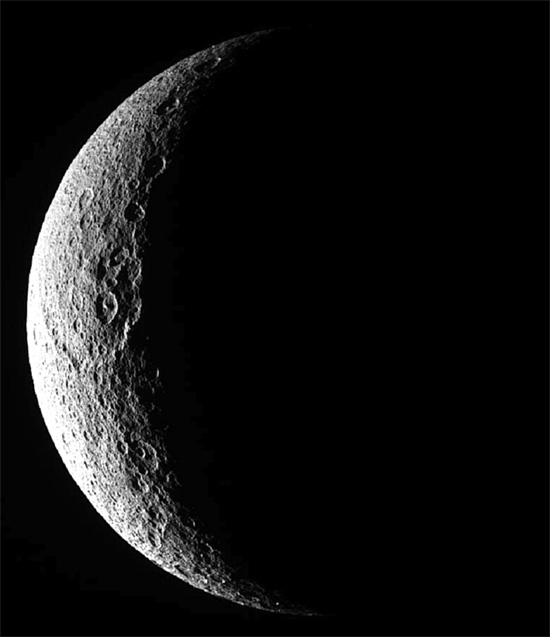 A thin mix of oxygen and carbon dioxide has been found above Saturn’s moon Rhea.

A NASA press release states that the atmosphere on Rhea is 100 times less dense than that found on Europa by the Galileo space probe to Jupiter. Where does the oxygen come from?

In a previous Picture of the Day about cometary asteroids, it was noted that negatively charged oxygen ions are found near cometary nuclei. Also, as physicist Wal Thornhill remarked in the past, the “forbidden lines” in neutral oxygen spectra around comets indicate that they possess intense electric fields.

Several examples of how Jupiter’s highly charged electric environment creates features on the planet’s many moons have been presented here in the past. The observed phenomena are deemed “mysterious,” and they appear to contradict the theory of an electrically neutral solar system. Jupiter’s moons Ganymede and Europa are now known to electrically influence the gas giant’s plasmasphere.

Astronomers suggest that the vapor plumes from Enceladus are because Saturn’s gravity “kneads” the moon as it orbits. The particles then flow as an electric current to Saturn. However, since electricity flows in a circuit, the one-way connection cannot be correct. Rather, Enceladus acts like an electric generator as it travels through Saturn’s plasmasphere, inducing current flow along its magnetic field into Saturn’s electrical environment.

Relative to Saturn, Rhea is most likely negatively charged. Saturn’s powerful opposite charge is probably initiating an electric discharge, causing the water in Rhea’s icy surface to dissociate, so the presence of oxygen around the moon is not unexpected. Along with the water ice, the presence of frozen carbon dioxide subliming into space would be a reasonable expectation.

Since Saturn is a powerful source of electrical energy, it acts like a small sun to its family of orbiting moons. In that light, it should come as no surprise that it will eject its own radial current sheet of charged particles: a Saturnian “wind” similar to the flow of ions from the Sun that interacts with its moons, causing “cathode sputtering” of their surfaces.

In a June 13, 2007 European Space Agency release, it was announced that the moons Tethys and Dione are “flinging great streams of particles into space.” The discovery was made by the Cassini Plasma Spectrometer, when data revealed that the plasma surrounding Saturn was trapped within its magnetic field.

Electric Universe advocates argue that Saturn moves within the plasmasphere of the Sun and interacts with the Sun’s electric field. Planets and moons in the solar system are charged bodies. They are not isolated in space, but electrically transact with each other. Rhea moves within the plasmasphere of Saturn, so it stands to reason that it would interact electrically with its primary. The source of oxygen and carbon dioxide on Rhea is really no mystery.