Home Picture of the Day Made You Blink 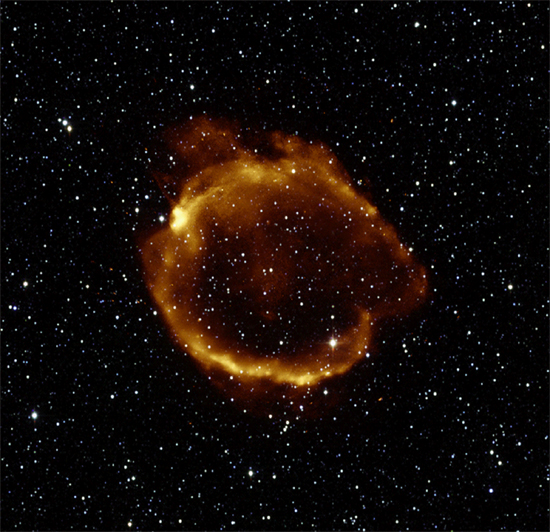 For three centuries, Newton was God, Gravity was King, and All was Explained. There were a few details to be worked out, such as how the Sun shone, but they were being filled in. Gravity could squeeze a cloud of hydrogen until it got hot enough to trigger nuclear fusion. The fusion could synthesize heavier elements, and Gravity could squeeze them until their electrons collapsed into their lowest energy state (called “degeneracy”).

With the addition of more mass (which Gravity was attracting from nearby), the “degenerate” star would reach another trigger point and explode. All stars that reached that point would release the same amount of energy, so measuring the intensity of the radiation could reveal the distance of the star…all the way back to The Beginning, when The Word was Gravity.

Then the space age brought a rush of unexpected data that seemed to contradict Gravity. Astronomers blinked. They didn’t just blink, they squeezed their eyes shut, refused to contemplate any alternative, and began to fantasize all kinds of ad hoc excuses to Save the King: dark matter, dark energy, tunnels through dusty galaxies, hundreds of nearly impossible coincidences, special laws for extraterrestrial collisions, exceptions to laws for stellar convection, violations of laws for magnetism. Modern astronomy became an asylum for deception, hallucination, and conformity.

In the explanation for this image of a supernova remnant, all the consensus presumptions are laid over the visual representation: “Type 1a supernova,” “an age of about 4500 years,” “double shell,” “gas and dust not uniformly distributed,” and the stereotypical “cosmic mile markers to measure the accelerated expansion of the universe and study dark energy.”

Comparison with other images of supernova remnants indicates the unblinking view that the ring is actually a ring in an hourglass-shaped galactic Birkeland current where it squeezes down around the central star. The increase in current density through a dusty disk about the star has pushed the ring into glow mode. The separate filaments of the galactic current show up as equally spaced pairs of bright spots. The “wiggling” of the ring marks its development into diocotron instabilities, as seen in auroral rings, with especially pronounced ones on opposite sides. The “ovalness” of the ring indicates that the system is inclined about 45 degrees to our line of sight.

Both models have a lot of squeezing going on. However, there’s an important difference between squeezing the eyes and squeezing an electrical current: doing the first prevents seeing the second. Having been indoctrinated with Gravity, it’s understandable that astronomers would blink. It’s pathetic that they refuse to open their eyes afterward.