Home Picture of the Day The Fog Clears 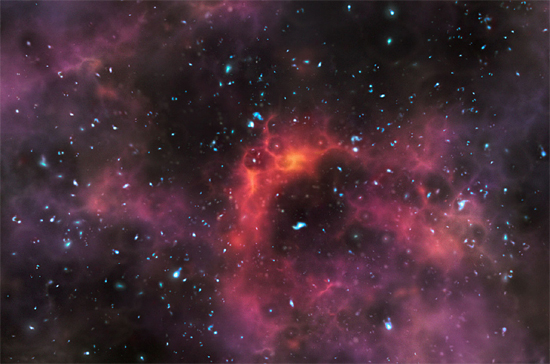 Redshift measurements of five galaxies verify what astronomers have always believed—if their beliefs are true.

The nice thing about math is that it provides results that are absolutely true. Unless you’ve made errors in your addition, you can be sure that your conclusions are without doubt. This saves a lot of time: you don’t have to do much if any empirical testing or searching for other possible conclusions. No other conclusions are possible. One plus one is always and only two.

Measurements, of course, are not absolutely precise, so there is a small range of possible conclusions. However, time spent increasing the precision of measurements in order to shrink the error bars of the conclusions is without doubt the best use of it. Why waste time thinking about imaginary conclusions that are clearly outside the range dictated by the math!

The Big Bang is, if anything, mathematical. It may be the most doubt-free theory—nay, fact!—of modern science. At the present rate of improvement in precision, in a few years astronomers should be able to announce that the universe banged at 9:30 on a Tuesday morning.

The latest improvement has enabled astronomers to measure the redshift of five galaxies that existed only a few hundred million years after that memorable Tuesday morning event. They can establish a timeline through the early period called the reionization era, when clouds of neutral hydrogen “fog” were gradually ionized and became transparent. They now know that 780 million years after the Creation Event, fog filled 10 to 50 percent of the universe. They find that only 200 million years later, the fog had cleared to today’s level.

The press release quotes the lead author of the paper announcing this result: “It seems that reionisation must have happened quicker [sic] than astronomers previously thought.” Although the grammar is in error, we can be sure the math is correct.

The deceptive thing about math is that the certainty of results tends to obscure the dependency on initial assumptions. If those assumptions are false, the mathematical results are absolutely false. If one’s fortune and prestige depend on the truth of the results, one has a strong incentive not to question the assumptions. One quickly realizes that the best way to do this is not to ask the questions, not to publish them, not to fund research that would investigate them. The certainty of the math then stands undoubted.

Many of these Picture of the Day pages have discussed the discordant redshift associations observed by astronomer Halton Arp and a few colleagues. The questions raised by the discordances have been not asked, not published, and not investigated so many times for so long that they have become boring. The only possible conclusion is that they falsify the Big Bang—and that’s impossible because: the math!

But if redshift is intrinsic, and these objects are nearby, the “fog” is not in the early universe but in the Big Bangers’ minds. The discordant observations indicate that the high-redshift objects are ejected from active galaxies. They also indicate that objects with higher redshifts are intrinsically fainter, so the objects with the highest redshifts are likely to be ejecta from the Local Group of galaxies, perhaps even from the Milky Way. The “10 to 50 percent” fog in the early universe then translates to “10 to 50 percent” chance of an intervening hydrogen cloud in the local neighborhood.

A sample of only five galaxies bears the burden of establishing the rate of hypothetical clearing in an assumed universe conjectured to have happened 13 billion years ago. The sample of discordant redshifts runs into the hundreds. But that latter sample seems to be lost in a fog of artifice, denial, and conformity.