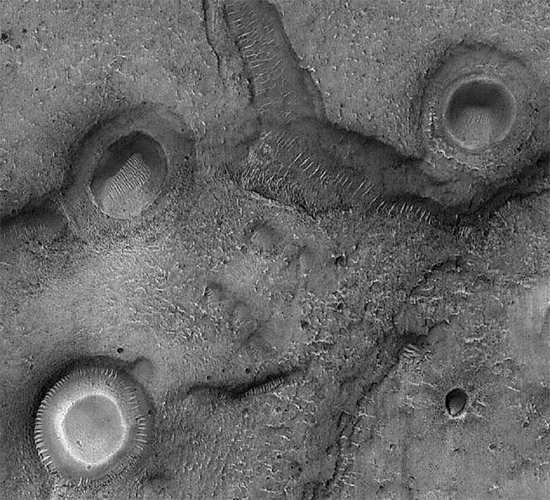 Portion of the Mare Acidalium quadrangle on Mars. Credit: NASA/JPL/University of Arizona

Did an atomic explosion decimate Mars long ago?

According to a recent press release, a new theory claims to explain how the planet Mars acquired its red color and its tortured, barren, and desiccated landscape.

According to the release, “About 180 million years ago, a planet-shattering yet naturally occurring nuclear reaction may have wiped out everything on Mars, sending a shockwave that turned the planet into dry sand.”

Why does the planet appear to have been devastated from pole to pole?  Dr. John Brandenburg, co-author of “Dead Mars, Dying Earth,” suggests that an immense nuclear explosion—albeit a natural one—destroyed Mars almost 200 million years ago.

Brandenburg’s theory is based on two regions of increased radiation that appear to have been caused by processes that once took place here on Earth, as well. In Franceville, Gabon, scientists noticed that there was an unexpected three-thousandth of a percent difference between expected values of uranium 235 compared to uranium 238 in their spectrographic analyses of rock samples.

It was suggested that two billion years ago, a self-sustaining chain reaction began in some mineral deposits containing uranium 235 in concentrations over three percent. Particular isotopes of xenon gas in the uranium deposits in the “Oklo reactor” region of Gabon are said to indicate that a natural nuclear reaction burned for thousands of years until the fissile uranium was exhausted.

Brandenburg says that the “natural explosion” on Mars was more like a blast and not a reactor. The million megaton atomic detonation is supposed to have scattered radioactive dust from Mare Acidalium all over the planet. The increased detection of xenon 129 isotope radiation is supposed to confirm the connection between Gabon and Mars. Several factors in both the Gabon and Mare Acidalium theories might lend themselves to other explanations when the time of both observations is adjusted. Rather than 200 million, or two billion years, what if both anomalies were created in the same more recent events?

But what about electric discharge in an earlier, highly electrified phase of Solar System history? The truth is that the Martian terrain presents definitive evidence of electric arcing to the surface in a global re-sculpting of the planet. Much of the evidence involves enigmatic dendritic ridge systems or “Lichtenberg Figures.”  We see this sharply carved relief along hundreds of miles of the gigantic Valles Marineris.  Identical morphologies appear on both the “caldera” walls of Olympus Mons and its miles-high scarp.  The same formations stand out on great mesa cliffs, along the walls of extensive rilles, and even on the rims of huge craters. These unique configurations cry out for a common explanation, but conventional geology has nothing to offer. As documented in the video presentation, “The Lightning-Scarred Planet Mars,” laboratory experiments readily produce the forms with electric discharge.

Burned and blasted craters, along with piles of scorched dust cover almost an entire hemisphere of Mars. Gigantic trenches across its scarred face could indicate that lightning thousands or millions of times more energetic than we know today devastated Mars.

As discussed exhaustively on these pages, countless “anomalous” geologic features on Mars have eluded any conventional explanation. From the great trench Valles Marineris, to the so-called “volcano” Olympus Mons, to the vast (900 km) crater in Argyre Planitia, to the strangely terraced mounds in Arabia Terra, as well as both Martian poles, the planet’s surface offers what could well be the most promising laboratory in the solar system for testing electric discharge explanation of planetary surface. In other articles on this site, we’ve discussed the experiments of Dr. C.J. Ransom, who replicated the hematite spherules (“blueberries”) that litter the Martian landscape by blasting a bed of hematite with an electric arc.

We’ve also noted evidence of the electric-discharge transmutation of elements, which would mean that isotopic ratios, no matter which elements are considered, cannot be used to prove or disprove the timeframe of any radiative emissions.

Past Pictures of the Day deal with geological formations all over the world and with craters exceeding 100 kilometers in diameter. In some cases, there are glass spherules or large chunks of pure silica lying in broken pieces all over the area. What could account for kilometers long fields of broken glass shards like those in Egypt or large sheets of “Darwin glass” from Australia? Surely the most reasonable explanation based on laboratory experiments, not wild theoretical leaps, is provided by planetary-scale cosmic thunderbolts, melting and fusing the soils into glass. Perhaps the timeframe will be difficult to establish so long after the events, but the question of cause can no longer be avoided..

Intense ionizing radiation most likely bombarded Earth and Mars at some time in the recent past. Rather than nuclear reactors in the ground it was electricity from space that left its imprint.