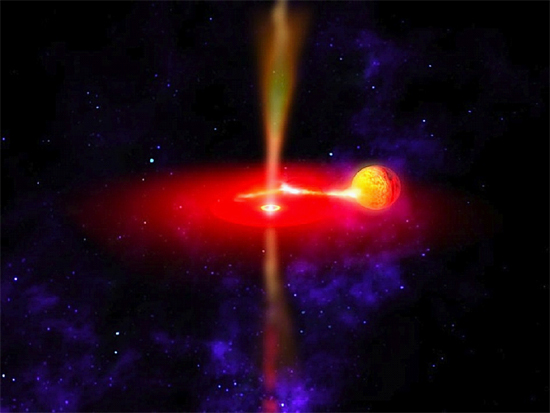 Most astrophysicists try to explain narrow jets erupting from various sources by using words like “nozzle” or “high pressure,” contradicting the known behavior of gases in a vacuum. For example, according to a recent press release, “flares” have been discovered jetting from a source close to the center of our galaxy. Consensus opinions call that source a black hole.

As Poshak Gandhi from the Japan Aerospace Exploration Agency (JAXA) said, “If you think of the black hole’s jet as a fire hose, then it’s as if we’ve discovered the flow is intermittent and the hose itself is varying wildly in size.”

Discovered by the Wide-field Infrared Survey Explorer (WISE), GX 339-4 is approximately 20,000 light-years away. It is conventionally presumed to be at least six times more massive than the Sun, with a gravity field 30,000 times more powerful than Earth. GX 339-4’s extreme activity is supposed to be due to a companion star “feeding” its stellar matter into the black hole’s putative gravity well. However, some of that material gets blasted into space at close to light speed.

The mechanisms by which intense gravitational fields eject tightly collimated steams of matter are not understood. It is thought that strong magnetic fields are required, but the source of that magnetism is not known, since no mention of electricity exists in the reports about such phenomena.

Some flares and X-ray jets are thought to be generated by heat from molecular collisions, causing the gas to glow. As theories indicate, gamma rays might also appear when the super-accelerated matter is eventually sucked into the black hole. Excess heat, X-rays, and gamma rays are not created by gravity. In laboratory experiments, it has been found that they are most easily produced when charged particles are accelerated through an electric field.

Previous Picture of the Day articles about black holes suggested that the terminology used to describe “gravitational point sources” is highly speculative: space/time, singularities, and infinite density are abstract concepts, precluding a realistic investigation into the nature of the Universe.

There is no evidence that matter can be compressed to “infinite density.” Z-pinches in plasma filaments form plasmoids that become stars and galaxies. Electricity is responsible for star birth, as well as death. When current density gets too high, double layers in the stellar circuit catastrophically release excess energy, appearing as gamma ray bursts, or X-rays, or thermal flares.