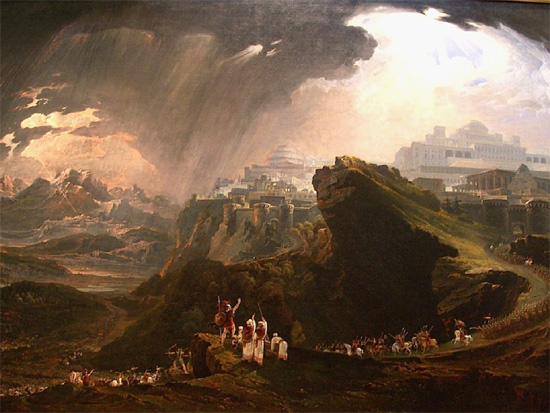 Were the myths and legends of ancient peoples entertaining fantasies comparable with Harry Potter stories? Or were they efforts to make sense of the world, comparable to the Big Bang and evolution? Or were they e) none of the above?

If they were entertainment, why were they coordinated around the world? The Hebrews tell about Joshua making the sun stand still at midday. The Aztecs tell about a long night when the sun didn’t rise. The Chinese tell about a long afternoon when the sun refused to set. There was no copyright law back then, so the author (if there were an author) couldn’t prevent changes in knockoff copies. Why would copyists adjust the tale to fit a rotating globe when they didn’t know that the globe was rotating or even that it was a globe?

There are thousands of these stories. They add up to one story told around the world. How could this be in an age before Netflix?

If they were efforts to make sense of the world, the one story isn’t a problem. After all, there is only one world, and sunrises and thunderstorms are the same everywhere you go. However, that only pulls the left boot out of the mud to sink the right boot into it. The stories aren’t about sunrises and thunderstorms but about planet-gods hurling thunderbolts, mountains melting, seas sloshing over mountains, and dragons spitting fire from the sky.

The stories are consistent within each society’s epos and coordinated among societies. Allowing for anthropomorphizing and imaginative interpreting of a global physical occurrence, one ends up with a story of electrical planetary catastrophes at the beginning of recorded history.

In a word, that’s impossible. In several words, if such an event happened, then Newton’s Law of Gravity only applies in modern times, and the ancients were playing by different rules in another league. And those rules allowed much rougher play.

If we had never put probes into space, we might have got away with not bothering our pretty little heads about myths. Ground-based instruments had already revealed that stars and galaxies don’t play by gravity’s rules; theoreticians had begun filling in the empty spaces with fairy dust to save the theory. That’s just normal science. The probes have been rubbing our noses in the failures of gravity to explain anything without help from the fairies.

Both stars and galaxies exhibit axial jets of luminance: viewed from the stars or galaxies, the jets would look a lot like the mythical axis mundi or world mountain described in myths.

Planetary nebulae turn out not to be spherical shells of gas blown off exploding stars but hourglass-shaped tubes of plasma filaments. When viewed “down the barrel,” they often appear as a ring with “diocotron” instabilities—bright knots or whorls—in it, much like the auroral oval over the Arctic. The similarity to the mythical ouroboros—the serpent or dragon biting its tail—is apparent.

Flat-bottomed steep-sided excavations cover rocky planets and moons. They bear little resemblance to lab impacts of high-speed projectiles; instead, they mimic the scars produced by electrical discharges. Electrical circuits connect the Galilean moons of Jupiter to the planet, and the “volcanic plumes” of Io match the discharge of a plasma focus. Cassini has detected some of the circuits connecting Saturn with its moons.

With gravity falling into disrepute—to make it work, 96% of the universe has to be composed of fantasy materials that can’t be seen—electrical planetary catastrophism is an interesting alternative. It suggests mechanisms that can be investigated and tested in a lab. Those mechanisms are compatible with the testimony of our ancestors about terrifying events that couldn’t have been gravitational.