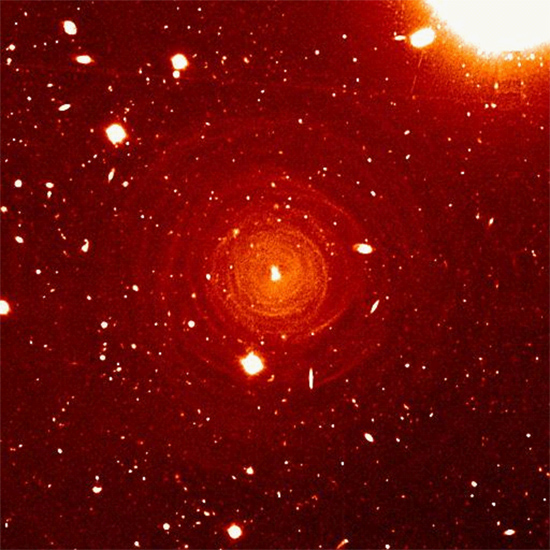 According to a recent European Space Agency (ESA) press release, the Herschel infrared space observatory discovered a cloud of hot water surrounding a giant star in constellation Leo known as IRC+10216. Space scientists were puzzled by the discovery of water near other carbon stars, but the Herschel team thinks they know what creates it: ultraviolet light.

As the ESA bulletin states, “It is the only explanation for why a dying star is surrounded by a gigantic cloud of hot water vapour.” Supposedly, ultraviolet light from nearby stars penetrates the envelope between gaseous “clumps,” breaking apart carbon monoxide and silicon monoxide, allowing oxygen and hydrogen atoms to attach, forming water.

IRC+10216 is a red giant star, surrounded by a massive cloud of dust that absorbs most visible light. The only way to “see through” the dust barrier is with infrared detectors. It is in that dust that the water vapour was found. The “clumpy structure” in the dust around the star is said to contribute to the formation of the water.

In an Electric Universe, stars are electromagnetically and externally powered. A star is the locus of electric currents that circulate through the galaxy along star-spanning filaments known as Birkeland currents. A red giant is a star lacking a photosphere, the “surface” from which main sequence stars emit radiation. In the case of IRC+10216, its chromosphere has expanded in order to meet the red giant’s electrical needs.

Electric Universe advocate Wal Thornhill writes: “Red stars are those stars that cannot satisfy their hunger for electrons from the surrounding plasma. So the star expands the surface area over which it collects electrons by growing a large plasma sheath that becomes the effective collecting area of the stellar anode in space. The growth process is self-limiting because, as the sheath expands, its electric field will grow stronger. Electrons caught up in the field are accelerated to ever-greater energies. Before long, they become energetic enough to excite neutral particles they chance to collide with, and the huge sheath takes on a uniform ‘red anode glow.’ It becomes a red giant star.”

A relatively cool atmosphere exists beneath the chromosphere of a red giant, so larger and more complex molecules can exist there. The molecular oxygen and the carbon atoms around IRC+10216 are created in the star’s atmosphere because an electric field accelerates electrons toward the star. This flow of electrons is balanced by a flow of positive ions radiating in the opposite direction. Electric stars form by Marklund convection, so they do not possess cores of compressed hydrogen. Heavy elements, including carbon, collect in their cores.