Home Picture of the Day Io 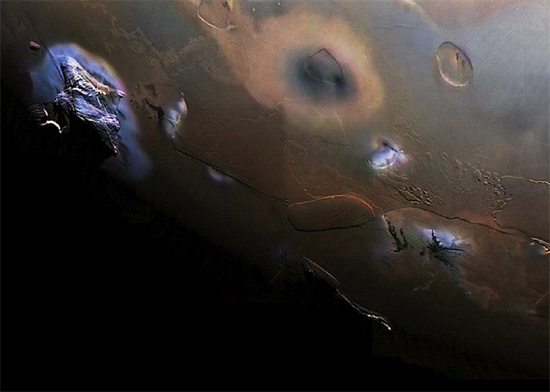 Io has puzzled planetary scientists for years. Electric Universe advocates are not so mystified.

“The Io close-up shows a surface that bears all of the classic features of a spark-machined surface—the flat clean crater floors and steep circular scalloped walls with sharp edges.”
— Wal Thornhill, December 1999

When the two Voyager space probes discovered “surprising volcanic activity” on Io, plasma physicist Wal Thornhill predicted that the plumes erupting from its so-called “volcanic vents” would be hotter than any lava fields ever measured. His prediction was confirmed when it was found that the caldera around the vents exceeded temperatures of 5700 Celsius.

Io orbits close in to Jupiter, so intense electromagnetic radiation bombards its surface, removing approximately one ton per second in gases and other materials. Io acts like an electrical generator as it travels through Jupiter’s plasmasphere, inducing over 400,000 volts across its diameter at more than three million amperes. That tremendous current flows across its magnetic field into the electric environment of Jupiter.

The plumes seen erupting from Io are the result of cathodic arcs, electrically etching the surface and blasting sulfur dioxide “snow” up to 600 kilometers into space.

As predicted, the most active regions of electric discharge were found to be along the edges of so-called “lava lakes,” while the remainder of the dark umbras surrounding them were extremely cold. No volcanic vents were found. Instead, what was discovered is that the plumes move across Io, as illustrated by the Prometheus hot spot that moved more than 80 kilometers since it was first imaged by Voyager 2. The volcanic plumes also emit ultraviolet light, characteristic of electric arcs.

Electric discharges can accelerate material to high velocity, producing uniform trajectories that then deposit it at a uniform distance. This explains why there are rings around the various caldera. Cathode erosion of Io also provides a reason why the plumes seen highlighted against the black of space possess a filamentary structure, reminiscent of Birkeland currents that have been discussed many times in these pages.

From a conventional perspective, ignoring the connection between Jupiter and Io means that the filamentary structure of the volcanic plumes will never be adequately explained. The New Horizons spacecraft flew by Io on its way to Pluto and the deep space beyond, sending data that revealed the electrical connection Io has with Jupiter.

The Tvashtar “volcano” near the north pole of Io, was seen by the New Horizons probe to be shooting a plume hundreds of kilometers high. A NASA press release reported that “…the remarkable filamentary structure in the Tvashtar plume is similar to details glimpsed faintly in 1979 Voyager images of a similar plume produced by Io’s volcano Pele. However, no previous image by any spacecraft has shown these mysterious structures so clearly.”

It appears that the electrical circuit on Io is concentrating Jupiter’s current flow into several plasma guns, or dense plasma foci, as noted plasma physicist Anthony Peratt observed more than twenty years ago: “The apparent filamentary penumbra on Io may be the first direct verification of the plasma gun mechanism at work in the solar system.”

“Tidal kneading” of Io is not the cause of its heat: Io is not being heated from within by friction. The most probable cause, based on observational evidence and laboratory analysis, is that Io is receiving an electrical input from Jupiter that is heating it up through electromagnetic induction.