Home Picture of the Day As Below, So Above

As Below, So Above 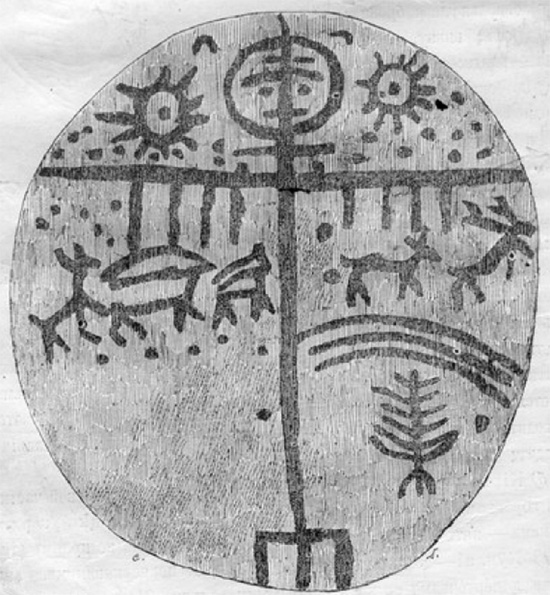 A traditional image of the cosmos, in which the central axis, the spirit Älgän, is a macrocosmic version of a human being. Front side of an Altai drum, Siberia. © A. V. Anokhin (1924).

Nary a traditional culture failed to believe that the gods modelled the ‘lesser’ things on earth, including many aspects of human life, on the ‘greater’ things in the sky.

European esoteric belief systems shared and elaborated this core idea. In its most common application, the ‘macrocosm’ or the larger cosmos surrounding the earth was viewed as a perfect template for much smaller structures, such as the ‘microcosm’ of the human body – or any intermediate, ‘mesocosmic’ systems. This philosophy is enunciated in the famous maxim ‘As above, so below’.

The phrase is lifted from an obscure tract known as the Emerald Tablet or the Smaragdine Table. This is a philosophical text purporting to convey the teachings of the Greek Hermes as a historical person, but only known from citations in much later works. Though its earliest attestations are in Arabic works dated to the 9th century CE at the very earliest, there is a fair possibility that a genuine Greek original lay behind it; that things on earth are shadows of celestial prototypes certainly bears the signature of Platonic thought. At any rate, the Tablet was most highly revered within the Hermetic movement, which took its origins in the esoteric, non-Christian tradition of late Antiquity and rose to great prominence during the European Renaissance.

Few are aware that the original passage, according to most versions, taught a law of reciprocal symmetry rather than one-way traffic. Thus, the Latin edition published in 1541 proclaims:

‘What is below is like that which is above and what is above is like what is below, in order to perform the wonders of the one thing.’

That is to say, the world displays the same structures on different levels, due to the operation of the same principles.

Astrologers and alchemists often put the adage to uses that seem over the top from a modern point of view. Olympiodorus of Thebes, for instance, was a fifth century Egyptian alchemist who was happy to declare that ‘The macrocosm has sun and moon’ just as ‘man has two eyes, and the right eye is related to the sun, the left eye to the moon’.

Such excesses aside, the Hermetic axiom rings true on a different plane – that of underlying physical laws defining structure and movement in the universe. Since the Enlightenment, level-headed scientists have conducted laboratory experiments on the premise that the laws of electromagnetism are scalable. Representing the earth by a small magnetised sphere called a terrella or ‘earthlet’, the English physician and scientist William Gilbert (1544-1603) proved that the earth, too, is a magnetised body. Writing in 1717, Sir Edmond Halley took the analogy to a higher level by explaining the earth’s aurorae in terms of Hauksbee’s electrical experiments on a terrella. Following a series of ups and downs in auroral research, the Norwegian scientist Kristian Birkeland eventually provided incontrovertible proof that the aurorae do indeed follow electromagnetic principles that can be fruitfully analysed using downscaled replicas.

During the twentieth century, the study of the analogy between electromagnetic phenomena in the laboratory and in space came under the umbrella of plasma physics. The American plasma physicist Harold Webster confirmed that experiments in which a laboratory plasma is artificially exposed to electric current or a magnetic field, triggering effects in accordance with Maxwell’s equations, may count as ‘laboratory analogs of the polar aurora’. As in the Hermetic dictum, the correspondence works both ways and is sometimes more theoretical than practical; the Canadian scientist William Petrie put it thus: ‘We can think of the upper atmosphere as an enormous test tube in which physical and chemical reactions can occur that are difficult if not impossible to reproduce in a terrestrial laboratory’.

Provided that the relevant parameters are correctly identified, the laws of plasma physics appear to apply under controlled laboratory conditions as well as in the furthest reaches of space. In Eric Lerner’s words:

‘Thus the stately processes of the cosmos, ranging from auroras lasting hours to prominences lasting days to galaxies lasting billions of years, can all be modeled in the lab by rapid discharges lasting millionths of a second’.

Calling for utmost caution, Hannes Alfvén determined that ‘a scaling by a factor of 10^9 to 10^12 is necessary’ in order to extrapolate from laboratory results to the magnetic fields of planets or the sun. Upping the ante, another scaling factor of 10^9 to 10^12 is required to apply the results to the level of galaxies. The use of ‘scale invariants’ or ‘quantities that don’t change as the scale of the phenomenon increases’ is indispensable and progress is continuously made on this.

The scalability of plasma is an all-important discovery, potentially capable of overturning many a cherished theory that is founded on ‘pure’ mathematics rather than a salutary combination of observation and experimentation. The astrophysical literature of the past two or three generations is replete with references to arcane, unobservable and untestable concepts that know no counterparts in our local environment. The proponents of ‘metaphysical’ concepts such as ‘black holes’, ‘wormholes’ and ‘dark matter’ may well meet their comeuppance when the fractal-like nature of the cosmos surfaces from obscurity once again.

That the Hermetic writers – be they Marsilio Ficino, Giordano Bruno, John Dee, Robert Fludd or indeed Isaac Newton – knew little of electricity beyond the static form and never rose above the crudest understanding of the states of matter goes without saying. Yet it would be unfair to look down upon them for this deficiency. The Hermetic paradigm acted as a major catalyst in the Renaissance, followed by the Enlightenment, and was instrumental in the arousal of the sleepy scholastic intellect that had characterised late-Mediaeval Europe. Its research programme, as embedded in the Emerald Tablet, foreshadowed the rational methods developed during the Enlightenment and it is an uplifting thought that this same guideline may prove even more relevant today than it ever was before – for as human instruments travel ever further away from the earth, our awareness that the physics here below shed light on the mysterious things far above may well usher in another Renaissance.