Home Picture of the Day Son of Zeus 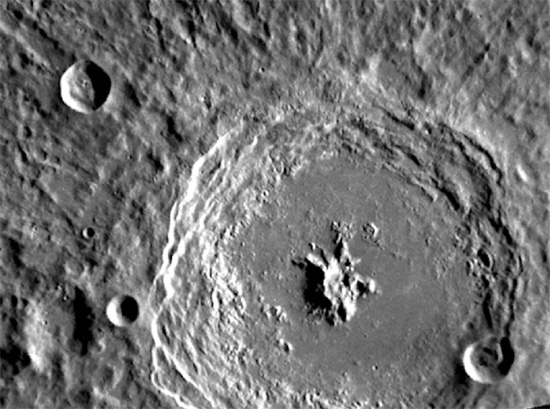 MESSENGER has completed 100 orbits around the planet Mercury.

In the image at the top of the page, all the characteristics of an electric discharge leaping from Mercury’s surface to space can be seen. The crater walls are terraced, there is a peculiar spiral-shaped crater on the southeastern rim, and several ridges converge onto the central peak. Bartok’s floor is also flat and smooth for the most part, one of the signs that point to a plasma event of some kind in Mercury’s history.

In order to construct a new theory of planetary evolution, it is necessary to first assume different engines of transformation and a rapid morphology. Electric Universe physicists couch their theories in assumptions that do not conform to the “long slow change” required by conventional ideas of planetary formation. Clearly, catastrophic evolution cannot be merged with gradualism. If the Solar System is a four-billion-year-old antique, then there is no way for a hypothesis that calls for recent restructuring to coexist. A new way of seeing the Universe must first be adopted.

Many of the features on Mercury are similar to those found on Mars, as well as the Moon. Bright rays extend outward from several large craters on Mercury, similar to those seen around Tycho Crater on the Moon. However, based on an analysis of Tycho crater by the late Ralph Juergens, it is more likely that the rays formed when material suddenly rushed toward the middle of the crater. A powerful electric current pulled loose rocks and dust inward into the center of an active region where bolts of electricity discharged upward. This conclusion is diametrically opposed to consensus opinions about “ejecta ray” formation.

Another unusual structure in the image of Bartok crater is the hexagon located to the Northwest. Nearly every rocky object in the Solar System exhibits similar structures. How can the impact of a space rock cause a hexagonal crater? No experiment can create a polygonal shape after an explosive event. No, as pointed-out in several previous Picture of the Day articles, hexagons are created when intense particle beams touch down on a solid surface.

Electric arcs are composed of Birkeland current filaments. Researchers studying the issue have found that beams of electricity flowing through plasma create a central column surrounded by concentric cylinders. The cylindrical discharge can sometimes form diocotron instabilities in the vortex, forcing a hexagonal shape. As the filaments rotate around one another, a hexagonal cross-section forms within the innermost column.

Another example of electrical effects on Mercury are the etched furrows radiating outward from some craters. Earlier images of Caloris Basin show the same kind of etching. In 2007, Dr. C. J. Ransom performed an experiment at Vemasat Laboratories in Fort Worth, Texas. He exposed a thin layer of magnesium silicate to a 120 milliamp, 12,000 volt discharge for five-seconds. In that short period, he produced radial gouges in the substrate similar to what has been found on Mercury. Dr. Ransom’s experiments serve to demonstrate the scalability of electrical activity.

Concentric structures are found on Mercury. When electricity passed through them it eroded material from the surface where the arc touched down because the pits and craters left by electric arcs are usually circular. An electric arc is composed of two (or more) filaments rotating around a common center, so the surface was excavated by a plasma “drill bit,” leaving steep sides and a “pinched up” rim of debris. If several filaments were involved, the plasma beams would have cut one crater within another, often with one or more smaller craters on the rims.

After traveling nearly eight billion kilometers, the MESSENGER spacecraft settled into orbit around Mercury on March 17, 2011 and began its scientific mission on March 23. It is apparent that more information from the innermost planet will continue to confirm Electric Universe theories of Solar System dynamics.