Home Picture of the Day That One Story Again

That One Story Again 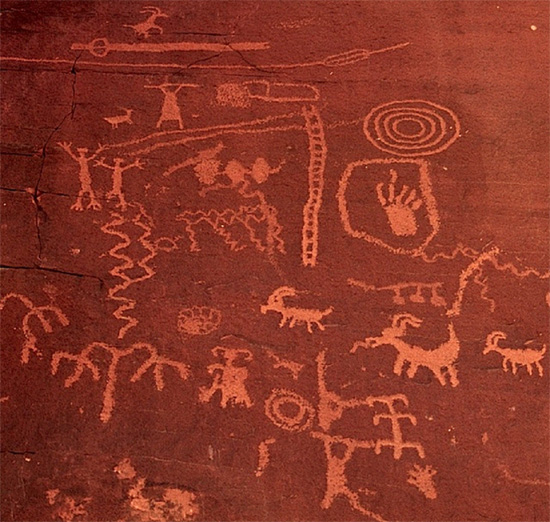 Detail of a petroglyph from The Valley of Fire, Nevada. Credit: John Cole.

Ev Cochrane’s recent book, “Fossil Gods and Forgotten Worlds”, again presents the challenge to explain an undeniable intelligibility in a large and coherent body of data.

Petroglyphs, myths, and rituals around the world are composed of the same motifs: the ladder to heaven, the great star, and the thunderbolt—to name only three. The motifs are linked within each ancient society’s oeuvre and therefore are implicitly defined: the thunderbolt springs from the eye of the hero as he descends the ladder from heaven. Furthermore, the linkages are the same around the world.

This is not a new insight. Many mythologists have remarked on the one story told around the world. The difficulty lies in explaining that pattern of recurrence. There would seem to be only three possibilities.

One Story: Some physical event with a global occurrence inspired the anthropomorphic narrative. If the story were about sunrises and thunderstorms, there would be no difficulty. However, the story is about planetary gods hurling hammers and fiery wheels from a celestial column that is fixed along the axis of heaven. If those planetary gods are the same planets that we see today, the story violates the Law of Gravity and is impossible.

One Storyteller: This was the first story told by the handful of first humans as they huddled around the first campfire in Africa. Their descendants took it with them as they spread around the world. They changed the names of the characters as they invented different languages, but they kept the motifs and plots and even the specific details of the images and interrelationships.

Thus, a primitive tribe in the Amazon today tells of the same ladder to heaven as the ancient Babylonians told of because their ancestors carried it unchanged across the Bering land bridge during the Ice Age. This explanation trades impossibility for incredibility.

One Storytelling: The human brain is hardwired to generate this myth in all its details. Then why did it generate those myths and glyphs only during the Age of Mythmaking, not before, not now? Today’s comparable creation myth, the Big Bang, retains the explosive initial event but puts it far in the past beyond human witnessing and devotes most of the narrative to slowly changing uniformity.

For ancient people as for modern, their myths are the explanatory foundation for their world and their behavior in it. How can people today be so smart if their ancestors were so stupid? How could the ancestors have survived? Why would not natural selection “deselect” them? This explanation suffers from the same problem as the first: If the world then was the same as now, the story is impossible.

The key is the conditional: if. Already the world today is not the same as it was just a few years ago. The growing awareness of plasma behavior in the laboratory and in space correlates with ancient art and artifacts, and it undermines Presently Accepted Theories with their P.A.T. answers.

The technologically enhanced vision of space telescopes and trans-optical detectors “see” polar configurations and thunderbolts throughout space. Herbig-Haro stars and active galaxies sport rope- and snakelike columns of plasma along their spin axes, often with bright knots of plasma entwined along them. In an Electric Universe, these structures are the “wiring harnesses” that power the star or galaxy below them pushed into visibility by a surge in the current.

Gravity cannot explain such structures. Astronomers have invented all manner of ad hoc excuses, magnetic artifices, and arbitrary mathematics to justify ignoring the plain sense of the observations. Similarly, mythologists have ignored the plain sense of myths and petroglyphs. The result has been the denial of a past that imbues the present.

Dare to flip the switch: the universe will never again look the same.

“Fossil Gods and Forgotten Worlds” is available from Stickman on Stone.