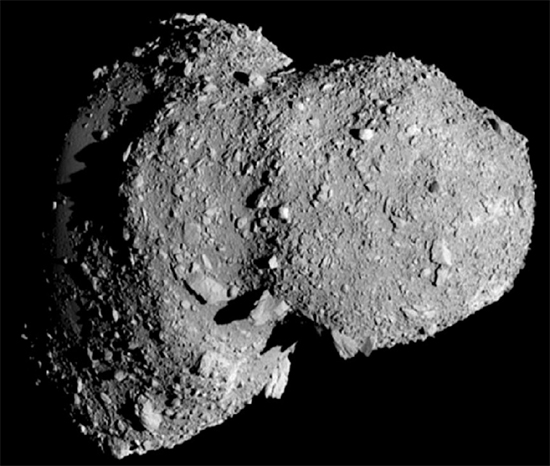 Hayabusa’s return to Earth was delayed for more than three years.

The Japan Aerospace Exploration Agency (JAXA) launched the Hayabusa spacecraft (Japanese for “Peregrine Falcon”) in May of 2003, after a several month delay and a change in mission goals as a result. Hayabusa was originally scheduled to rendezvous with the asteroid 4660 Nereus, but problems with the launch vehicle caused that target to move out of range during repairs.

On its way to the alternate selection, 25143 Itokawa, the spacecraft was struck by a solar flare, damaging its solar cells. This decreased power to its ion engine, increasing the flight time to Itokawa, thereby reducing the time spent in the asteroid’s vicinity, since the return to Earth had to take place in November 2005 without fail.

Compounding the bad luck with the mission, a lander called the MIcro/Nano Experimental Robot Vehicle for Asteroid (MINERVA) failed to properly deploy. As a result, it could not remain within Itokawa’s low gravity field and it was lost to space. Several alignment thrusters also failed while the probe was in orbit, meaning it could not properly maneuver for its primary assignment, collecting samples from the asteroid’s surface and returning them to Earth.

Hayabusa was supposed to close with Itokawa twice, then fire pellets into the rock, scooping up the impact debris. However, it did not fire any pellets during two landings. In order to avoid a complete failure on all counts, mission specialists reprogrammed the instruments, instructing Hayabusa to settle onto the asteroid and remain for over 30 minutes, in hopes that some of the material kicked-up by the landing would drift into the collection container.

Engine failure, sample gathering failure, failure to place its lander on the surface: JAXA scientists despaired of finding anything inside when Hayabusa returned.

On June 14, 2010 the wait was over. More than a thousand fragments, none more than a few tenths of a millimeter, were inside the capsule. Upon analysis, the team was surprised to find that the silicates they collected from Itokawa had at one time been exposed to temperatures in excess of 800 Celsius. This finding strikes a familiar tone to Electric Universe proponents.

When the Stardust mission returned cometary material from Comet Wild 2, project scientists were surprised to find minerals that can only form at similarly high temperatures. Anorthite, a compound of calcium, sodium, aluminum and silicate, and diopside, made of calcium magnesium and silicate were found on Wild 2. Chondrite, or “stoney,” meteorites are of similar mineral composition. This finding can only mean that comets, asteroids, and meteoroids share a similar birth.

According the Electric Universe theory, all are relative newcomers to the solar family and might have been blasted out of larger bodies by tremendously powerful electric discharges in the recent past. They are all solid, rocky, cratered, electrically charged objects.