Home Picture of the Day The Cosmic Web Imager 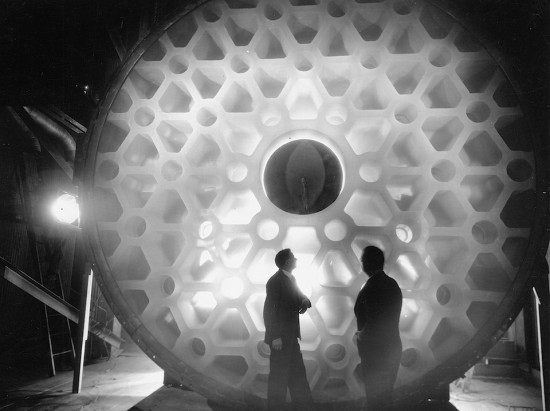 The Intergalactic Medium (IGM) is where galaxies are born, according to standard theories; it is also where they live. It is thought to be a diffuse gas connecting all galaxies in the Universe. Composed primarily of ionized hydrogen atoms, its density is calculated to be no more than one atom per cubic meter, compared to the Interstellar Medium at one atom per cubic centimeter.

Vacuum (or gaseous density) is measured in torr units. Standard atmospheric pressure on Earth is about 760 torr. The lowest vacuum ever created in a laboratory is reported to be <1×10^-13 torr (about 1000 atoms per cubic centimeter), where the IGM is 10^-19 torr.

According to a recent press release, astronomers using the Cosmic Web Imager (CWI) at Mt. Palomar Observatory announced that they have succeeded in mapping this extremely rarified region.

As written in previous Picture of the Day articles, the standard model of the Universe states that the IGM is composed of “baryonic matter”. Baryons are what is commonly referred to as “normal matter”, or atoms. However, along with baryons, consensus opinion among astrophysicists is that there is a vastly greater concentration of non-baryonic matter, otherwise known as “dark matter”, comprising more than 80% of all mass in the cosmos. Another factor in the standard model is “dark energy” that makes up another 14% of the unobservable Universe. 25% of the remaining 4% is bright matter, or stars and galaxies, that can be seen with optical telescopes.

The report by Caltech researchers, using the CWI, infers that they have observed some of that remaining 3% of baryonic matter; calling it “dim matter” to distinguish it from dark matter. Dim matter forms the IGM’s cosmic web, that lattice of interconnected filaments so often published in astronomical texts.

Caltech physics professor, Christopher Martin said: “When you look at the gas between us and a quasar, you have only one line of sight. You know that there’s some gas farther away, there’s some gas closer in, and there’s some gas in the middle, but there’s no information about how that gas is distributed across three dimensions.” The CWI is supposed to provide a more precise way of determining the distribution of that gas.

Their observations reveal a tendril of gas flowing into a quasar that is shining in Lyman alpha hydrogen light. Quantum physics postulates that a hydrogen atom’s electron orbit must abide by its principal quantum number. Mathematical calculations use n = 1 for the smallest orbital radius, n = 2 for the next quantized orbital step, n = 3, and so on.

Since electrons are negatively charged, they are attracted to protons by their binding energy. Each “n” orbit’s binding energy is expressed in electron volts. The closer to a hydrogen atom’s nucleus, the greater the binding energy. When electrons jump down from a higher binding energy orbit to a lower one, they emit light in the ultraviolet range. The photo emissions from the n2 to n1 jump correspond to 121.6 nanometers, a frequency band known as “Lyman-alpha” radiation, named after Theodore Lyman.

Lyman alpha emissions are plotted by the CWI according to their redshift. As written elsewhere, in the standard model, redshift equates to an object’s recessional speed. As Big Bang theory postulates, the faster the recession, the farther away that object is, and the closer it is to the “beginning of the Universe”. The Lyman alpha signals detected by the CWI are supposedly redshifted into the visible spectrum, so are said to be coming from a time two billion years after the Big Bang.

Problems with dark matter theory, redshift, and the Big Bang have been addressed many times in these pages. Electric Universe theory postulates galactic evolution occurring as large-scale electrodynamic plasma discharges form coherent filaments. Gravity certainly contributes to the behavior of star clusters and galaxies but it is not the primary energy source for their consolidation. When plasma moves through a cloud of dust and gas, the cloud becomes ionized, initiating an electric field and the flow of electric charge. Electricity moving through any substance forms magnetic fields that tend to align and constrict the current flow. Those fields create Birkeland current filaments.

It is probable that the Universe is constructed from threads of matter. However, those threads are most likely electrical in nature. Since the idea that electricity flows through the Universe is commonly met with resistance by today’s consensus, its influence and attributes are unseen. It has long been said that “seeing is believing.” It should not be surprising that “believing is seeing” appears to be more apt. When there is no inner experience, outer realities can often remain invisible.

Black, dark, and dim are the hallmarks of conventional theories. The Electric Universe takes the opposite tack, preferring brightly glowing, energetic electric discharges as the heart of its fundamental tenets.