Home Picture of the Day Lights in Space 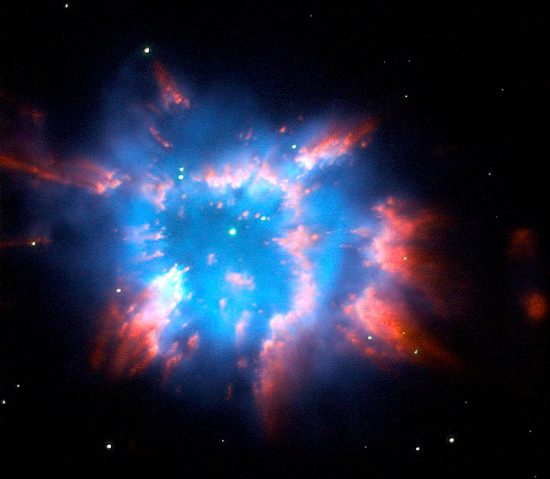 Nebulae are not what you may think they are.

The prevailing opinion about planetary nebulae is that they are created when shockwaves “blow” through them. Those shockwaves are said to be “winds” from exploding stars. In some cases, a nebula might be described as “star forming”, because X-rays, or extreme ultraviolet light, are thought by consensus astronomers that nuclear fusion is occurring.

Ionized clouds of dusty plasma were first called, “planetary nebulae”, because in the early days of astronomy they appeared to be round, and faintly greenish, similar to the planet Uranus, so it was assumed that they were gas giant planets, as well. Nebulae are observed in all shapes and sizes, particularly those with elliptical shapes or helical spirals. Conventional descriptions include stellar winds “crashing into” slower nebular material ahead of them, forming the shapes like atmospheric clouds might form.

According to a recent press release, The Hubble Space Telescope observed a planetary nebula with “…glowing wisps of outpouring gas that are lit up by a central star nearing the end of its life.”

Most astronomers would agree with the theory of stellar evolution along the main sequence. When a star reaches its red giant phase, it ejects its outer layers, leaving its hot central core behind. This later phase is known as a white dwarf star. There is no mention of electricity when a source of ionization in the cloud is discussed, however. All that is permitted is the high frequency light from a dying star.

In an Electric Universe, plasma, not hot gas (or even ionized gas), flows through space. The physics of electricity applies within the shell of a planetary nebula, because there are one or more plasma sheaths, or “double layers” acting like capacitors: storing and releasing electrical energy. The charge flow alternately increases and decreases within the sheaths.

Since charged particles in motion create an electric current, a magnetic field wraps around the current channel, diminishing in strength with the square root of the distance from it. Magnetic fields get stronger when more charged particles move in the same direction, or when they move faster, so ions moving through the magnetic field get squeezed toward the axis. Plasma physicists refer to this as the “Bennett pinch.”

Electric discharges in plasma clouds create double layers along their current axes, allowing positive charge build up on one side and negative charge on the other. A strong electric field exists between the sides, and if enough current is applied the double layers glow, otherwise they are in the invisible “dark mode”.

Double layers and current filaments respond to interstellar electric charge in a circuit that threads through the Milky Way galaxy. They are mostly in dark mode, because of their low current density, but the magnetic fields they produce are apparent and detectable in the Bennett pinch zones that arise.

A neon lamp would be a more appropriate description for any particular nebula. Electricity passing through neon gas creates a plasma that glows a pale yellow. Other gases, such as oxygen or hydrogen, produce blue and red light, while heavier elements emit their own colors.

“It’s been 100 years since Birkeland encountered his aurora, and his conception of electric currents in space, developed by such pioneers as Irving Langmuir and Hannes Alfven, has been a footnote to standard theory, rarely called upon except to explain the occasional curiosity in space.”