Home Picture of the Day Petrospheres 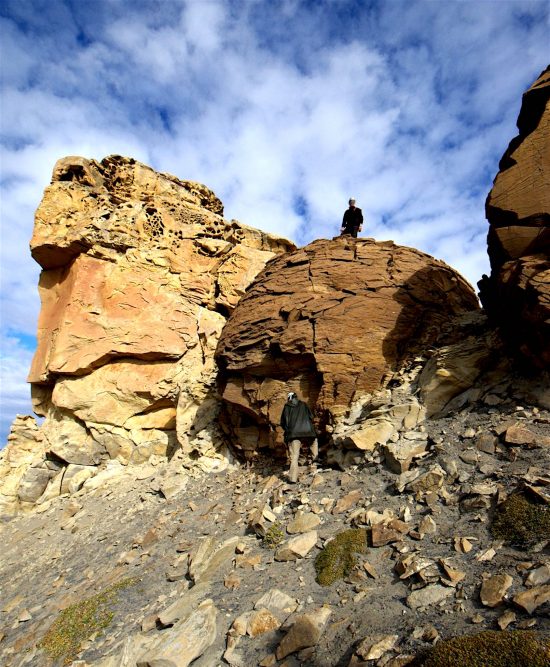 Stone spheres are found all over the world.

Stone spheres were worshipped by some past civilizations, especially if they dropped out of the sky. They were often placed on plinths and were thought to be messengers from heaven. People in Greece, Rome, Arabia, and many other locations, believed that the spheres either “fell from heaven” or were formed in mysterious and catastrophic events.

This article is an attempt at identifying a unifying principle that provides a possible reason for how they form. Conventional ideas see a slow accumulation of minerals, otherwise known as “concretions”. It is suggested by geologists that calcium carbonate and other water-soluble compounds layer onto a “seed” stone over millennia. Many spheres are found “weathering out” of sedimentary deposits, so the concretion theory was thought to be the only possible explanation for them.

How to explain a spherical rock in the first place. The question is compounded when many spheres are layered or hollow, or contain other loose minerals inside them. Some spheres, such as the oil-filled geodes in Illinois, are pressurized and spew oil when they are cut.

Most stone spheres are clustered together and are not random. They are sometimes found in one part of a rock formation, but not in adjacent areas of the same rock. It is obvious, in most cases, that there could not have been spherical pockets in the flat sedimentary layers as they were deposited. Neither could there have been spherical cavities in the sediments while they were compressed into rock.

For example, geodes are assumed to begin as concretions. How did those concretions form? Why would they be spherical? If they formed in a liquid or plastic-like medium, gravity would pull them into dome shapes. If they formed by rolling around in a resistive substance, friction would alter their shapes, so whatever created them must have been symmetrical.

The vast majority of theories are based in mechanical action: rolling, spinning, tossing, etc. However,  another force produces spheres — electric discharge. An electric z-pinch is far more powerful than gravity. In the laboratory, tiny spheres formed by electric pinches are often hollow. Electric forces tend to produce layering, along with distinct equators and poles, since electric forces “squeeze” perpendicular to the current. These features are found in the “natural” stone spheres. For instance, an accumulation of small spheres in Utah called, “Moqui balls” have both equatorial bulges and polar markings.

In a previous Picture of the Day, a description of glassified spherules, created by Dr. Cj Ransom’s experiments with high voltage discharges, lent credence to the theory of lightning strikes as the means by which stone spheres form. Based on research into the shape and size of so-called, “blueberries” on Mars, Dr. Ransom exposed samples of rock dust and soils to high voltage electric discharges. His results are remarkably similar to the Martian blueberries, and to other such accumulations of stone balls on Earth.