Home Picture of the Day Beyond Dark and Empty

Beyond Dark and Empty 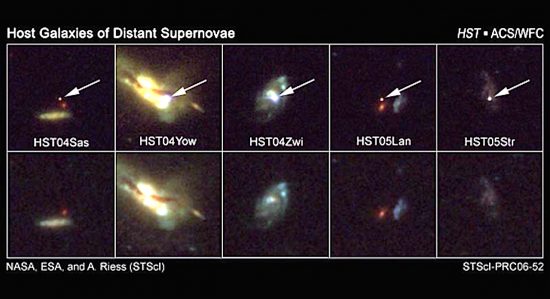 High-redshift supernovae, together with their host galaxies. Credit: NASA, ESA, A. Riess (STScI).

Before the space age, astronomers looked up at the night sky and saw points and patches of light.

Astronomers assumed that if they detected nothing, nothing was there. They conceived theories to explain how those points of light could be lumps of familiar solids, liquids, and gasses that persisted and moved in the darkness and emptiness. The theory of gravity explained how a cloud of hydrogen could squeeze itself together and heat up. The atomic theory explained how that hot hydrogen could start nuclear reactions and produce more heat. The kinetic theory of gasses explained how the pressure from the heat could balance the pressure from the gravity to create a star. The explanations fit together precisely into a theory of stellar evolution that described everything (or almost everything) seen in the dark and empty universe.

Then the space age extended our sense of sight to include the entire electromagnetic spectrum, from radio waves to gamma rays. It extended our sense of touch to the planets and asteroids and comets, even to the Sun. We stuck the fingers of our probes into the dark and empty spaces. Our sensory sampling of the universe was liberated from the limitations of our biological niche on the surface of a wet and rocky planet. We could sniff the solar wind, taste the rocks on Mars, and see the x-rays from the comets.

We discovered the universe is bursting with plasma, a state of matter almost unknown to our previous geocentric and anthropocentric condition. Plasma is often mistaken for a hot gas, but it doesn’t behave as familiar gasses do. Instead of merely expanding when heated, it pinches into filaments and cells and jets and donuts. It generates magnetic fields and microwave noise and x-ray bursts. It accelerates particles to relativistic velocities and polarizes radiation. It conducts electric currents and transmits power across large distances. It gathers matter from the surrounding space and separates it into shells of like composition.

The telescopic dot of a galaxy we call M49 is the invisible center of a cloud of radio emission connecting thousands of galaxies and filling a quarter of the sky. The cloud swirls into the north throwing out knots of x- ray brilliance like astronomical fireworks. The cloud also swirls into the southern sky, where another spray of brilliance erupts. On the other side of the sky swirls a similar cloud. Even the spaces between these glowing plasma cells are filled with the electromagnetic fields of Birkeland “transmission lines.”

The assumption that detecting nothing means nothing is there is the assumption of a man standing in a dark room: But when he moves, he detects the furniture with his shins. Space probes are the shins of astronomy: They have moved away from the Earth and away from biological senses. They have detected the electrical furniture in space by getting blasted with unexpected radiation and shocked with unforeseen currents. Moving vicariously through the dark spaces with technologically enhanced senses, astronomers who can’t see the light can feel the heat.

Space is not the only domain of experience that has appeared dark and empty. Ancient history, myths, art, and rituals contain much that is obscure. They describe fantastical objects. They depict images devoid of mundane designations. They seem to have little coherent relation to the world of our geocentric and anthropocentric senses.

Many modern social structures and behaviors appear irrational and senseless as well. Wars and oppressions trace their motivations into the shadows of the past. Institutions perpetuate arbitrary yet orderly traditions.

The shins of astronomy have also stumbled into the furniture in this social room. The patterns of human expression now appear to emanate from an archaic spectacle of plasma discharges not seen again until space probes detected them in other stars and plasma physicists reproduced them in laboratories. Our history looks back to an origin in a primordial experience of celestial plasma on Earth.

That experience was both traumatic and galvanic. It brought us both scotoma and lucidity, depravity and nobility. It may have been the genesis of consciousness. We have been obsessed to memorialize it in art and rituals and institutions. We have been compelled to repress it and to deny it but also to imitate it in battles and genocides. But we have also transformed it. Artistic imagination turned that experience of suprahuman events into human expression and meaningfulness. Scientific curiosity turned it into understandings of the nature of things, which empowered development of technologies. Economic inventiveness turned it into the production of wealth through trade and the division of labor. Political conation turned it into diplomacy, social organization, and statesmanship. Religious meditation turned it into spiritual enlightenment.

The space age brings us a vision not only of a cosmos bright with new senses and full of new phenomena but also a history bright with new sensibilities and full of new self-identity. Our ancestors, and therefore we, are neither the victims of dark ignorance nor the dupes of empty superstition but the creators of a developing lucidity and meaningfulness. We are not merely survivors, but heirs. Our opportunity and our responsibility is to invest the profits of the inherited dark and empty theories in new bright and full ventures.