Home Picture of the Day That That Is, Is

That That Is, Is 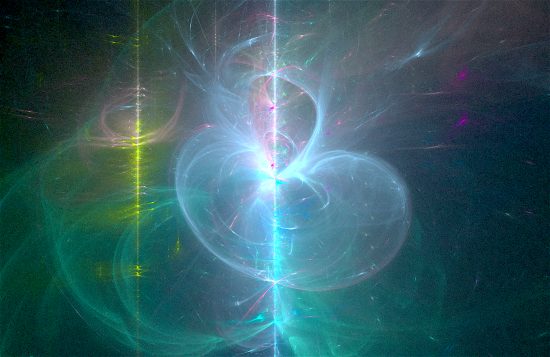 “Nearby Dimensions”. Fractal by Stephen Smith.

Where did we come from?

Generally, there are two competing views about how the Universe is evolving. In the first instance, the Universe was born in a Big Bang: an intrusion from another reality that provided the impetus for all matter and energy. The components of this Universe are expanding into a five-dimensional geodesic, while a force called “dark energy” accelerates the expansion. Over time, the Universe will gradually disperse and fade away into oblivion.

The second theory relies on something called, “the Big Crunch”. In that view, the Universe is cyclic; in fact, it is known as “conformal cyclic cosmology”. Rather than arising from some other nested dimension and then expanding forever, the Universe expands and then contracts back to a monobloc, whereupon it explodes outward again. This happens forever.

Recently, the famed British physicist Sir Roger Penrose and his team claimed that data from the Antarctic research station, BICEP2, provides evidence for that idea. According to Penrose, “What we claim we’re seeing is the final remnant after a black hole has evaporated away in the previous aeon.”

BICEP2’s map of the so-called, Cosmic Microwave Background (CMB) reveals what the research group believes are “…magnetic fields from black holes in the previous aeon that have spewed Hawking radiation.” B mode polarization in the CMB supposedly occurred about 10^-37 seconds into the Big Bang with 10^16 gigaelectronvolts, causing the weak force, the strong force, and electromagnetism to be melded into one. It is those B mode “holes” that might harbor the remnants of a previous existence.

Electric Universe proponents do not normally take sides in the issue of origins. How the Universe began, provided the word, “began” is even useful in such a discussion, is not a topic of speculation. What exists suggests that the Universe is electrical in nature, with charge separation already “built-in”. This means that there is some circuit connecting all physical objects in space that provides a power supply for those objects to move and change. Where that circuit rises and where it sinks are not known and can never be known.

Using theories that include ideas like the Big Bang, redshift, the “fabric” of space/time, inflation, the CMB, and gravity waves, science resorts more and more often to arcane postulates based on fantastical ideas. Respected scientists and mathematicians like Halton Arp, Stephen Crothers, Eric Lerner, Pierre-Marie Robitaille, Wal Thornhill, Dr. Donald Scott, and others too numerous to mention authored many papers uncovering the confusion running rampant through science. The links above provide a wealth of information dealing with various issues.

As mentioned in the past, space is not a substance anymore than time is. Space cannot warp or bend or expand and contract. “Space” is defined as, “the unlimited or incalculably great three-dimensional realm or expanse in which all material objects are located and all events occur”. Space is without substance. Instead, it is where substance exists. Therefore, it does not exist, except as a method for defining the existence and position of things. To infer that space and time are a “fabric” is ludicrous. Space and time are not physical, they are philosophical.

Based on that assumption, space and time are not capable of alteration. They cannot be born and they cannot die. That idea lends nothing to the problem of the Universe, and it is not meant to. It simply subtracts the reification of mathematical concepts from the investigation. Until the false trails are labeled and mapped, the way forward will not be found.