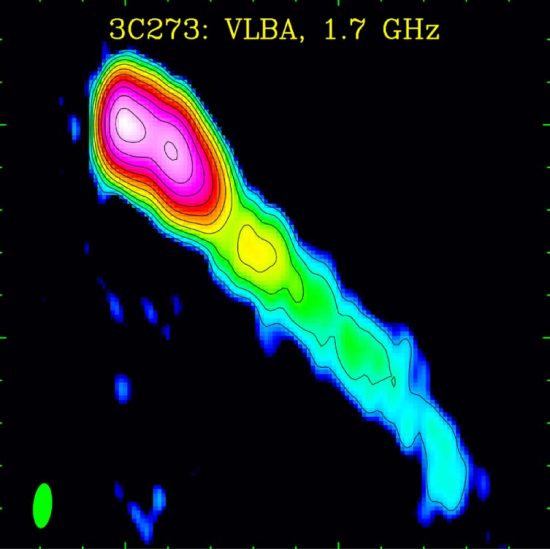 It is not the consensus opinion, but Electric Universe proponents think that galactic evolution occurs when large-scale plasma discharges form coherent, electrodynamic filaments. In that view, the Universe is an electrical system that is ever charging and discharging. Rather than gravity, electricity provides the energy source for galactic consolidation. Gravity, alone, does not explain how galaxies sometimes form long arcs, like silver beads on a string, threaded through the Universe.

According to a recent press release, a newly discovered quasar, PSO J352.4034–15.3373, is a “rare breed” that emits a relativistic plasma jet. Since the quasar is supposed to be more than 13 billion light-years away, the jet is thought to be incredibly powerful.

Conventional theories rely on gravity and acceleration for radiation to be produced in space: compressing hydrogen gas and dust is supposed to generate temperatures in the millions of Kelvin, causing them to glow brightly and emit radiation, including radio noise. Therefore, conventional theories see black holes as the only way to generate such intense emissions.

Whenever plasma ionizes a cloud of dust and gas (such as the plasma jet in PSO J352.4034–15.3373),  electromagnetic theories state that an electric field arises, along with the movement of electric charge. Electricity is defined as charge in motion, so electricity moving through any substance forms magnetic fields that align and constrict the flow. Those constrictions create what are sometimes called “plasma ropes”, otherwise known as Birkeland currents. Birkeland currents are visible at the largest conventional scales.

Galaxies, especially quasars, present many enigmas. Since astronomical theories rely on kinetic energy—gravity representing only one facet of that force—high temperatures “must be” due to gravity-driven collisions. Astronomers cannot measure the properties of extragalactic space, directly, so they develop mathematical models based on the behavior of neutral gases. They believe that plasma is merely ionized gas, so it only behaves according to the physical laws applicable to neutral gas (with slight modifications for electromagnetic effects).

However, when electric charge surges out along galactic spin axes, it forms double layers that can be seen as radio haloes and relativistic jets of various sizes and power. Electric charge blasts out of galactic poles, spreading out around a galaxy’s circumference, circulating back to the core as Birkeland current filaments. Since the elements in a circuit radiate energy, that energetic radiance shows that they are powered by larger circuits. The extent of the larger circuits may be traced by the polarized radio emissions coming from them.

Plasma’s behavior is dictated by electric circuits. Double layers with large voltages between them often exist. The electric force in double layers is incomparably stronger than gravity, broadcasting radio waves over a wide range of frequencies. Most significant to the bulletin, they can accelerate charged particles to extreme energies. The Universe is driven by electric circuits at ever larger scales, so electrons and other ions, accelerated through electric fields, radiate in many bandwidths.