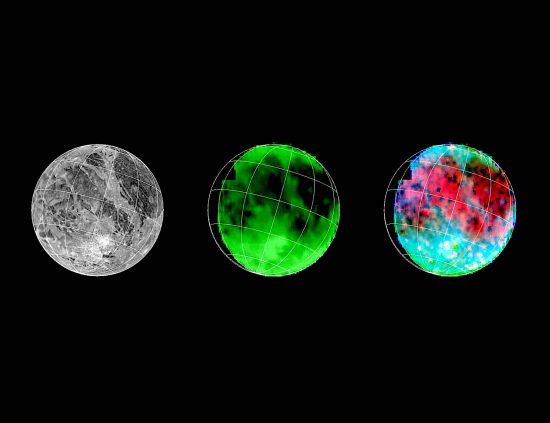 Planetary scientists sent seven different science experiments to Jupiter over the last forty years, beginning with Pioneer 10 in 1973. Of all Jupiter’s moons, Ganymede is possibly the most exotic, with a mix of topography, including fractures, craters and sinuous rilles.

Ganymede is unique because it is one of the few rocky bodies in the Solar System with an intrinsic magnetic field, something even Mars does not possess. During a flyby of Ganymede in December 1995 at an altitude of only 838 kilometers, the Galileo spacecraft discovered a dipole magnetic field similar to Earth, only much weaker. The signature of Ganymede’s flux tube, the electric current that connects it with Jupiter, can be seen in Jupiter’s polar aurora. Professor Don Gurnett and his team at the University of Iowa discovered powerful plasma waves near Ganymede.

With a mean diameter of 5262 kilometers, Ganymede is the largest moon, and is the fourth largest rocky object after the planet Mars. Its magnetic field is supposedly created by the moon’s core in a “dynamo” of sorts—again like the Earth’s core is supposed to generate its magnetic field. However, Ganymede’s core is thought to be too hot to hold on to permanent magnetism. On the other hand, Ganymede is so small that, according to conventional astrogeology, it should have cooled off billions of years ago and not have a liquid core in the first place. This is a puzzle to astrophysicists.

In an Electric Universe, it is plasma streaming into Ganymede’s thin atmosphere that creates the electromagnetic emissions. Power output from Jupiter electromagnetically sputters its frigid surface, generating both its atmosphere and ionosphere. Observations of Ganymede’s terrain indicate that the sputtering effect was far more intense at some time in the past.

Could Ganymede’s magnetic field be related to the electrical phenomena that scarred its surface? If Ganymede was closer to Jupiter at some point in its past, and was then wrenched from orbit and thrown thousands of kilometers farther out from its parent, could that force have been electrical in nature? Was the moon gripped by an electrodynamic field large enough to imprint its core with permanent magnetism? What effect does the electrical connection with Jupiter have on Ganymede today?

Galileo data continues to be analyzed. One interesting discovery about Ganymede is the presence of “whistler waves”. Low-frequency electromagnetic radiation exists on the moon, erupting in bursts that last a fraction of a second. They are considered a sure sign of electrical phenomena. A whistler is an extremely low-frequency electro-acoustic wave that is normally generated by lightning. They are called whistlers because they demonstrate a characteristically decreasing frequency falloff in detection equipment. In some short-wave radio transmissions, the whistle can be heard while tuning between stations.

Since Ganymede radiates in the infrared with more energy than can be accounted for, Electric Universe advocates presume that there must be a source for that heat. Ganymede possesses an ionosphere, so it is an electrically charged body. Its ionospheric charge flow carries electricity from Jupiter, as well as from the Sun’s solar wind ions. It could be that Ganymede is constantly charging and discharging in the infrared.

Ganymede is not really separate from the Sun; it acts like an element in the vast electrical circuit that powers the Solar System. Plasma discharges in that scenario are not so “unexpected”. The observational data, coupled with ideas put forth by such luminaries as Irving Langmuir and Hannes Alfvén, proves that lightning on Ganymede was both expected and predicted by Electric Universe advocates.