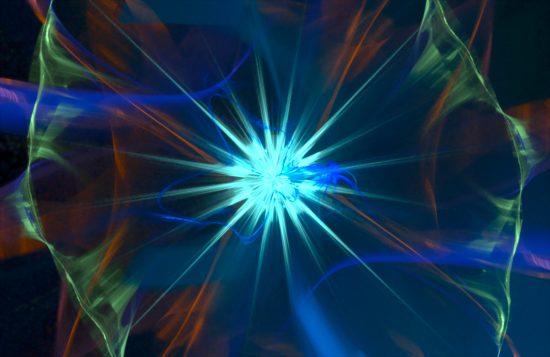 Stars are electrical and they evolve according to the laws of plasma physics.

“Every circuit which contains an inductance is intrinsically explosive. The inductive energy…can be tapped at any point of the circuit. If we try to interrupt the current…the inductance tends to supply its energy to the point of interruption, where the power…is delivered…This means that most of the circuit energy may be released in a double layer, and, if large, it cause[s] an explosion of the DL.”
— Hannes Alfvén

A recent Picture of the Day discussed the way that supernovae explosions occur in an Electric Universe. Instead of the traditional explanation that involves gravity and “core rebound”, supernovae are short circuits in a star’s capacitive attribute. Electric flux from galactic power generation builds up, until the accumulated charge overcomes a star’s dielectric insulation, causing the energy of a vast interstellar circuit to focus at one point.

A nova explosion, on the other hand, is something completely different. Conventional theories state that gravity is also the culprit, except that there is no detonation of an entire star. According to a recent press release, when a white dwarf star “…accretes too much material from its companion star, it ejects material…”

A previous Picture of the Day points out that binary star systems are probably the most common in the Milky Way. The explanation for those configurations is stellar fissioning. Since a star’s primary electrical activity takes place on its surface, if electric charge flow from the galaxy increases beyond a certain point, a star might divide into two daughter stars, increasing the surface area. Two stars in orbit within a space charge sheath are able to accept more electric flux.

However, consensus theories about star birth and evolution maintain that binary stars begin life as two “cocoons” close to each other inside a protoplanetary nebula. As the nebular “proplyds” contract over time, depending on the amount of material in their accretion disks, they might develop into two different kinds of star. Nova theory depends on that idea.

One type of star is the aforementioned white dwarf. White dwarfs are said to be quite hot; some of them exceed photospheric temperatures of 100,000 Kelvin. Astrophysicists think that if a newborn star possesses an exceptional initial mass, it will be so hot that it will quickly exhaust its primary hydrogen fuel and collapse under its own gravity. White dwarfs are, therefore, hot and dense, with high gravity.

If a white dwarf star is in orbit with a larger companion, it is said that it will draw stellar material away from the larger star onto its surface. Astronomers believe that its high gravity compresses the gas and dust against its rigid geodetic surface until it reaches fusion temperatures. At that point, pulses of high-frequency light and powerful shock waves erupt into space like a bomb going off.

Another way to see those events is to consider electric charge flowing through plasma. As charge flow increases, it generates an electromagnetic field that constricts the current channel. As pointed out in previous Picture of the Day articles, that constricted channel is called a “Bennett pinch”, or “z-pinch”. Those channels (filaments) form double layers with large potential voltages. Electric forces in double layers are far more powerful than gravity.

Double layers can explode, releasing more energy than is locally present. That effect is seen in solar flares, as well as in nova explosions. Novae could be thought of as coronal mass ejections that involve an entire star. When photospheric double layers expand, that expansion accelerates charged particles that are crossing it, causing collisions with neutral atoms. Those collisions show up as gamma-rays, X-rays and extreme ultraviolet light.

Expansion into surrounding plasma generates shock waves, but those waves are driven by a surge of electric charge. They are not stellar H-bombs going off. Just as the solar wind accelerates beyond the Sun’s surface, nova wave fronts continue to accelerate, where ballistically driven explosive debris would slow down. Exploding double layers are responsible for nova phenomena.