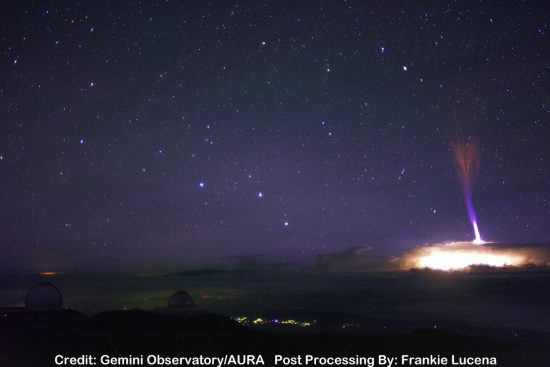 Capacitors accumulate and store electric charge in two conductive plates separated by a dielectric insulator. Charge on one plate attracts opposite charge to the other, creating an electric field that forms an electrical energy reserve. The electric field between plates increases as charges build up, which can eventually cause the insulating medium to fail, short circuiting the capacitor and releasing stored energy all at once.

Usually, it is the negative charge, although some powerful lightning bolts begin with positively charged leader strokes. An electric circuit between the clouds and the ground (or between clouds) is completed when the two connect, allowing a burst of electric charge to flash along a conductive pathway. It is the “return stroke”, though, that contains the greatest electric charge in lightning, delivering up to 100,000 volts at 100,000 amps: about 10 billion watts, or more, in a few milliseconds.

Lightning can also interact with charged particles coming from space, otherwise known as cosmic rays. Cosmic rays are mostly protons that can impact air molecules, knocking electrons out of their atomic clouds. Lightning flashes, as mentioned, possess powerful electric fields, so free electrons can accelerate through Earth’s mesosphere, bridging near-Earth space with the ground. Along with charged particles from the Sun, those electrons are the principle source for the Van Allen Belts.

Optimum conditions in Earth’s atmosphere enable the formation of giant particle accelerators above the clouds. When sufficient charge builds-up, those conditions generate discharge events between cloud tops and the mesosphere. Two of those events were discovered only 30 years ago: red sprites and blue jets.

Red sprites are massive, diffuse flashes, coinciding with normal lightning strokes. They are filaments of charge flow, extending to altitudes near 100 kilometers. The most powerful sprites are composed of individual smaller sprites that can cover horizontal distances of 50 kilometers, encompassing a 10,000 cubic kilometer volume.

Blue jets appear as narrow cones that reach altitudes of about 50 kilometers. Since they are confined within a smaller spatial volume, they are more powerful than red sprites. Sprites and jets are part of every moderate to large thunderstorm and are an essential component in Earth’s electric circuit.

Recently, another, related electrical phenomenon was observed by the Gemini Observatory on top of Mauna Kea, Hawaii. Referred to as a “gigantic jet”, the upwardly propagating detonation was reported in 2016, as well, by stargazers in China.

Gigantic jets are unique, because they can reach altitudes of 80 kilometers, or more, near the height of red sprites. They are only seen above the most powerful supercell thunderstorms, with discharges of 144 coulombs into the upper atmosphere over one second. That force equals the energy from the largest lightning bolts, as mentioned, above.

Earth is not isolated in empty space. Previous Pictures of the Day point out that the ionosphere is connected to the Sun by filaments of electric charge, so it is “plugged-in” to the Solar System’s electric circuit. For example, charge flow between the ground and the ionosphere can exceed 400,000 volts because “magnetic ropes” from the Sun are coupled to the ionosphere. Cosmic rays and the solar wind directly influence weather on Earth.