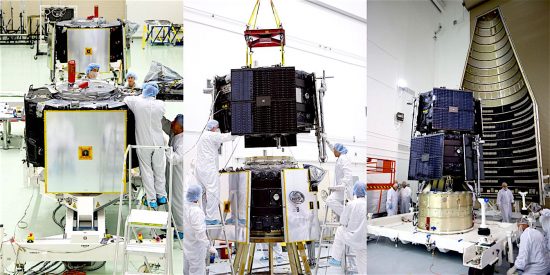 Bands of plasma circle the Earth.

Earth’s ionosphere is connected to the Sun by filaments of electric charge, so upper regions of the atmosphere are influenced by solar emissions. This idea is a basic tenet of Electric Universe theory. Since Earth has an electrically active plasmasphere, it is connected to circuits that drive its relationship with the Sun, as well as with other planets and moons. Charge flow between the ground and the ionosphere, called “the atmospheric electric potential”, can reach 240,000 volts, but is also known to exceed 400,000 volts.

At around 150 kilometers altitude the “dynamo region” is where the greatest conductivity in Earth’s magnetic field exists, known as the “maximum electric equipotential”. The most powerful charge flow along Earth’s geomagnetic equator takes place in the dynamo region.

According to a recent press release, a year’s worth of observations by the Van Allen Probes show that the ring current does not act in ways that were previously assumed.

It is not the intent of this paper to explain the many problems associated with the theory of magnetic reconnection. Suffice to say, the broad view proposes that an energy input, no matter what kind, can change from one form to another. How it is released or what starts the process are controversial subjects. Since energy cannot be destroyed, as the conservation of energy law states, it changes. For example, electricity is converted by a motor to kinetic energy. When friction stops the motor, its kinetic energy converts to heat. So-called “magnetic energy” is thought to reappear in different forms, as well. Some becomes heat, while some of the energy is conventionally thought to energize electric currents in a circuit linked with Earth.

An active structure called the magnetotail (or plasma tail) extends outward from Earth for millions of kilometers, always pointing away from the Sun. Charged particles ejected from the Sun are captured by Earth’s magnetosphere, collect in a plasma sheet within the magnetotail, and are held together by the magnetic field.

As written previously, the U.S. Navy satellite, TRIAD, recorded magnetic disturbances over Earth’s polar regions and in what were to be called the Van Allen Radiation Belts. Those vertical electric currents that flow to Earth from the solar wind were named, “Birkeland currents” by Alex Dessler in 1969.

The Van Allen belts circle Earth’s equatorial region, extending nearly as far as the Arctic Circle. They form two, nested donuts of particles: the inner belt consists of 10 million-electron-volt protons and is located in a region 700 kilometers through 12,000 kilometers above the surface. The outer belt is primarily electrons with energies higher than one million electron volts and is situated between 25,000 and 40,000 kilometers from the Earth’s surface. The orbit of the International Space Station is well below the inner edges of the belts. The Van Allen belts are always present in space and must be avoided by manned space missions, or exposure to them must be minimized.

In the Electric Universe, charge separation takes place around Earth because “tidal winds” move ionospheric plasma against the magnetic field. This effect induces electric fields and electric currents. The tidal wind charge effect is connected to the Sun with Birkeland current filaments. Earth’s rotation beneath the Sun creates a 140,000 ampere current through transformer action: the dynamo region acts as the primary coil, while Earth is the secondary. Transformer action, along with other electromagnetic induction, creates bands of oppositely charged plasma that move east and west around the planet, following the geomagnetic equator.

As has been written many times in the past, there is no such thing as “magnetic merging” or “reconnection” of magnetic field lines in the real world. The energy that the Van Allen probes observe comes from electric currents, which, unlike nonexistent magnetic field lines, can merge, and detonate.